Ellen Perez has won her semifinal in two tiebreakers to reach the final of the Australian Pro Tour event in Brisbane, backing up a run in Darwin. 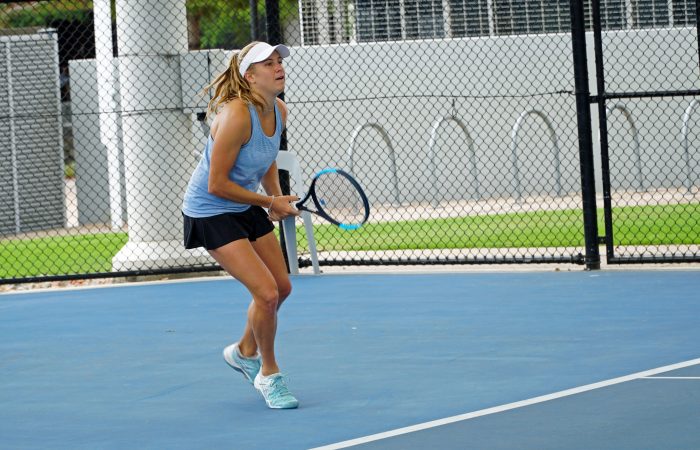 New South Wales’ Ellen Perez reached the final of the Brisbane QTC international on Saturday after successfully navigating her way through a tightly contested match against German Vivian Heisen.

While Heisen struggled with blisters after a gruelling week in which she came through qualifying, she threw everything she had at the No.8 seed. Perez had all the answers though, proving too strong in the deciding moments of the match to win 7-6(3) 7-6(4).

“She has a really good serve and for me it was about just making enough balls and concentrating on holding my own serve, as I knew it was going to be tough to break her,” she added. “When it came to the tiebreakers I was able to put some good tennis together and get those more important points.

“She was probably a bit tired after coming through qualifying so I knew when I got the first set that it put me in a very good position. It was about planning my game, moving forward and being the more aggressive player.”

Perez has reached the final relatively unscathed, having not dropped a set thus far in the tournament. “I definitely made it easier on myself by having some quicker matches. I’m actually feeling pretty good,” she said.

She will now face China’s Shilin Xu in the championship decider on Sunday. Xu looked defeated early in her semifinal, dropping the first set to Darwin winner Kimberly Birrell without so much as taking a game. However, the momentum shifted when she secured the second set in a tiebreaker and from there, Xu ran away with the match against a fast-fading Birrell to seal it 0-6 7-6(3) 6-0 – the Queenslander perhaps feeling the pinch of a long week in Darwin and some three-hour-plus matches in Brisbane.

“I didn’t know a great deal about her,” Perez said of upcoming opponent. “She’s a really good ball striker and when she’s on, she plays extremely well, but if I can weather the storm and play how I like to play, I think it will be great match.”

Should Perez be victorious, it will be her maiden ITF $25,000 title and also her first on the Australian Pro Tour. The win would also propel her to a new career-high ranking as she closes in on the top 200.

The men’s final on Sunday will be contested between Brit Evan Hoyt and Colin Sinclair of the Northern Mariana Islands. Hoyt defeated his doubles partner, American qualifier Dusty Boyer, while Sinclair, the No.8 seed, overcame local favourite Michael Look (No.7) in three close sets. Look had the clear upper hand after racing to a double-break in the final set, but Sinclair stormed back to clinch the match 6-2 3-6 7-5.

Both men’s and women’s finals will be played on Sunday starting at 11am at the Queensland Tennis Centre.