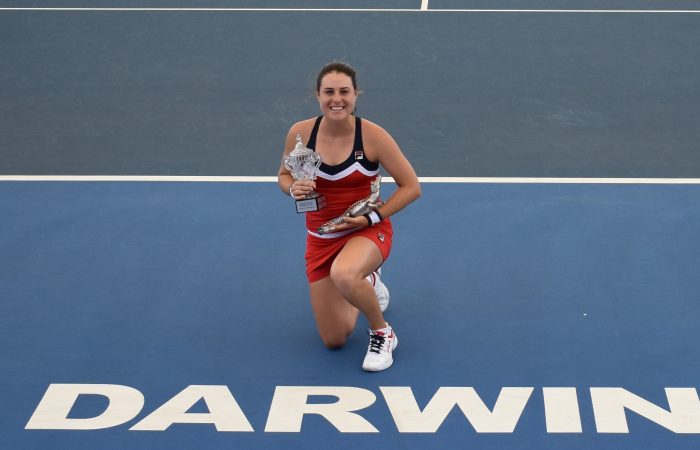 “It’s just a really good feeling,” the Queenslander said after taking her first ITF Pro Circuit $60,000 title. “I was super happy to play another good match today against another quality opponent. I played the kind of match I wanted to play and everything just went my way.”

In difficult windy conditions, Birrell held the impressive Perez – who, also unseeded, defeated a number of higher-ranked to reach the final – at bay.

“Ellen is a great player and I really respect her on and off the court,” Birrell said. “I just knew that I had to concentrate on my end of the court, weather her storm and stay really solid. I felt I was able to do that.”

For the 20-year-old, the win will place her back inside the world top 300. It also marks just her second Australian Pro Tour title, after success in Brisbane this time last year.

“It’s pretty exciting,” she said of the opportunity to defend her title next week. “I couldn’t have asked for better preparations, but I will just focus on each match and try not think too much of having to defend it.

“Brisbane is such an awesome week for me because I get to sleep at home in my own bed and I train there. My whole family will be there as well.

“I will enjoy this win and then concentrate on next week.”

After a series of injuries and extended interruptions to her career, Birrell looks to have finally found her fitness and with it, some confidence in her body to hold up in longer matches.

“I’m just enjoying playing without any niggles. I’ve worked really hard to get to this point and that’s something that I’m really proud of,” she said.

The men’s title match was an international affair, claimed by top seed Yuta Shimuzu of Japan who needed three sets to defeat Brit Evan Hoyt (No.6) 7-6(6) 3-6 6-4.

The doubles events were decided earlier in the week with Indian Rutuja Bhosale and Hiroko Kuwata of Japan proving too good for Brit Katy Dunne and Birrell. The duo showed their class in a comfortable 6-2 6-4 win, denying the Queenslander a perfect week in Darwin.

The men’s final was a tough-fought battle, but in the end the Aussie pairing of Jeremy Beale and Thomas Fancutt had too much for their opponents, Brit Brydan Klein and Scott Puodziunas, claiming the title 7-6(4) 6-3.