Unseeded duo Kimberly Birrell and Ellen Perez have set up an All-Australian affair for Sunday’s Darwin final after they continued their eye-catching runs. 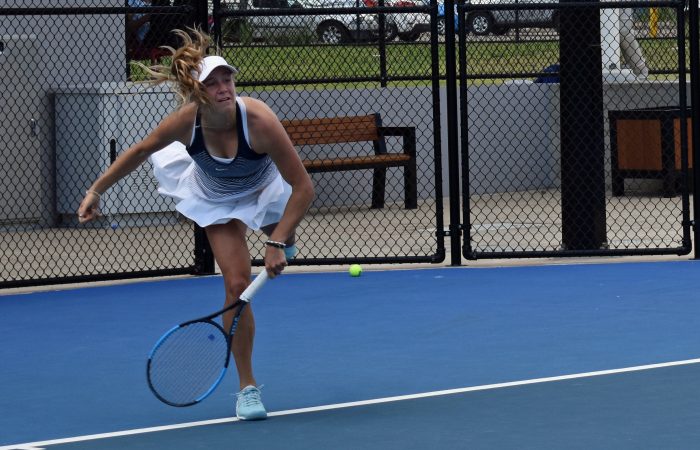 Aussies Kimberly Birrell and Ellen Perez will fight it out in the Darwin Tennis International final on Sunday.

Birrell, 20, started her semifinal match in the impressive form she displayed to beat top seed Olivia Rogowska earlier in the week. With a commanding lead – ahead 6-4 2-1 – she eventually made safe passage to the final thanks to a retirement from her opponent, Slovakian Zuzana Zlochova.

“It’s never how you want to win a match but I knew I just had to focus on everything I could on my end of the court and I was able to do that,” the Queenslander said.

Perez, who has beaten a string of quality players on her way to the final including Cairns champion Astra Sharma, proved too strong for Queensland wildcard Naiktha Bains, who was coming off a three-and-a-half-hour marathon on Friday and was unable to match Perez’s baseline power.

Birrell, who will be competing in her maiden ITF Pro Circuit $60,000 final, has never played Perez before and said she was looking for to the challenge.

“I’m just going to treat it like any match and try for every single point. Just compete hard and see what happens.”

In the men’s event, both remaining Australians were dismissed as Cairns winner and No.7 seed Jacob Grills handed top seed Yuta Shimizu a finals berth when he was forced to retire. Grills looked strong early, taking a set off the Japanese – a feat no other player has accomplished this week – before calling time on the match at 6-4 1-3.

Sixth-seeded Brit, Evan Hoyt, continued to display his good form and will pose a significant threat to Shimizu in Sunday’s decider after beating veteran Queenslander Michael Look (No.5) in straight sets 6-4 6-4.