On a day that saw a number of higher seeds depart, Ellen Perez has set up a clash with last week’s Cairns champion, Astra Sharma. 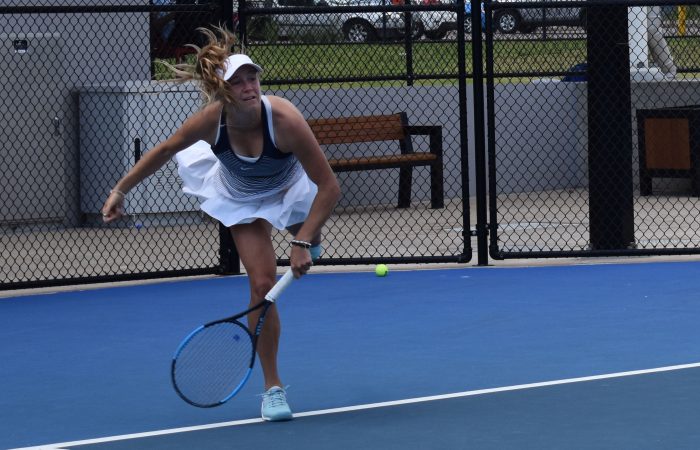 Ellen Perez has edged out fourth seed Jaimee Fourlis in their opening round encounter at the Darwin Tennis International on Wednesday.

“I’m super excited about the win,” Perez said, after withstanding a stern challenge from Fourlis, who won the Australian Open 2018 Wildcard playoff in December, to eventually prevail 6-4 6-7(3) 6-3. “It’s never easy to play a travel buddy, a hitting partner and close friend. She’s knows my game and likewise for me.

“We both played well in really tough conditions. It was extremely windy and swirly out there, so I’m just really happy to get the win.”

The current world No.265 admits this year has been “a bit up-and-down” in terms of results. “I have had some really good wins, but I’ve probably struggled a little more than I would have liked.

“As for doubles, I’ve done really well and that’s always been something I can rely on, but I’m definitely hoping to pick up a little bit more here at the end of the year,” the 22-year-old said. “I’ve tidied up quite a few things this year in my game that I thought I was lacking or not so good. Just now, I feel things are looking brighter.”

Cairns champion Astra Sharma didn’t miss a beat after her title victory on Monday, dismissing wildcard Alison Bai 6-1 6-3. She now faces Perez in what looks to be a stand-out second round encounter at the ITF Pro Circuit $60,000 event.

“We’ve had some really good battles before,” Perez said. “She’s won some and I’ve won some. It’s nice to know that I can match it with her.”

The biggest shock on Wednesday, however, came as second seed Arina Rodionova fell to inspired Chinese Taipei player Ya-Hsuan Lee, who took just 73 minutes to dispatch the Victorian in a convincing win under the new centre court roof, 6-2 6-4.

Aussies Zoe Hives and wildcard Naiktha Bains each advanced to the second round.