Ash Barty is enjoying another memorable run at the WTA Wuhan Open after brushing aside No.3 seed Angelique Kerber to reach the quarterfinals for the second straight year. 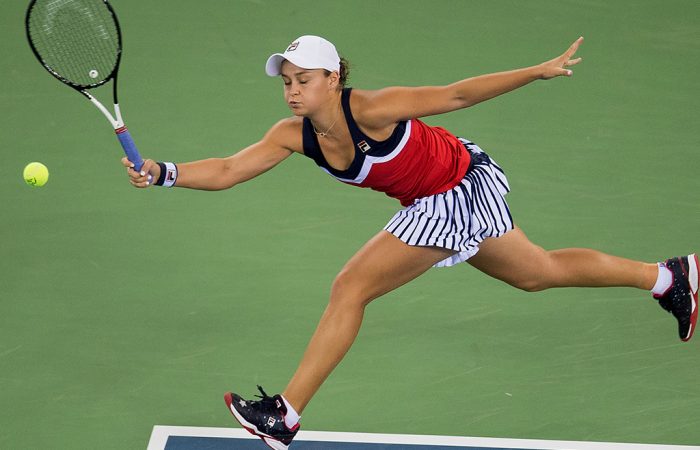 Ash Barty on Wednesday produced her most dominant display at this year’s Wuhan Open, handling third seed Angelique Kerber with apparent ease to take her place in the quarterfinals.

Stretched to three sets in the previous round by Zheng Saisai and requiring two tight sets to subdue Johanna Konta in her first match, Barty went up a gear to beat the Wimbledon champion 7-5 6-1.

Unfortunately, Daria Gavrilova couldn’t replicate the form that had seen her beat 2017 French Open champion Jelena Ostapenko in the first round.

Two matches after Barty graced Centre Court, Gavrilova went down 7-5 6-2 to local hope Qiang Wang in their round of 16 clash at the same stadium.

“I feel like this was by far my best match, probably my most clear match – with myself, with what I wanted to do, and the freedom to go out there and play and have fun and try to play my tennis,” Barty said, after beating her highest-ranked opponent of her career.

“I was a little bit caught up in the first two matches, but was able to get through not play my best, not feeling my best. And now it’s certainly nice to give myself another chance at another quarterfinal.”

“It’s nice to be back on this beautiful center court, playing some good tennis.”
–@ashbar96 #WuhanOpen pic.twitter.com/EPj56RF23m

The Australian’s forehand did the bulk of the damage from the ground throughout the 77-minute victory; at one stage early in the second set she belted a forehand winner down the line to double Kerber’s tally of winners (10-5) from that wing.

Yet her serve was also solid. Kerber earned seven break points but could convert only one, and the Queenslander slammed an ace down the T to complete victory.

Barty finished with more winners and less unforced errors than Kerber, who had won their last meeting in the final of this year’s Sydney International.