Wins for Dominic Thiem and world No.133 Dennis Novak give Austria a commanding 2-0 lead over Australia in the Davis Cup. 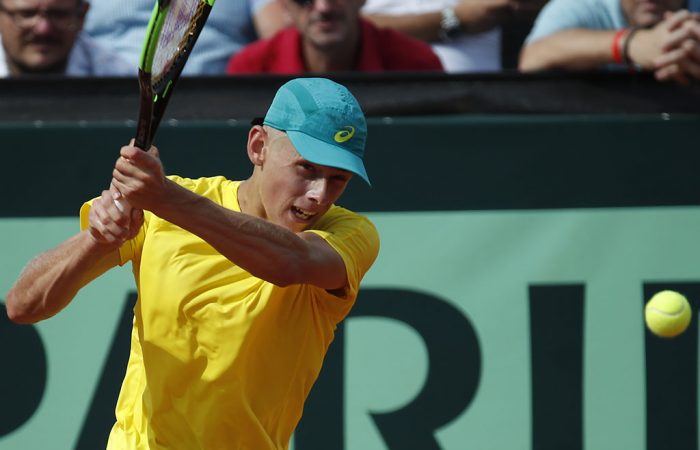 Australia face a sizeable task if they are to turn around their Davis Cup tie against Austria after the hosts won both singles matches on the opening day.

Austria lead 2-0 in Graz following wins for Dominic Thiem and Dennis Novak, and victory in Saturday’s doubles rubber will secure the tie.

“Firstly, the Austrians played fantastic, both boys played really well. I think the court surface definitely suited their games and they used the crowd to their advantage and got better as the matches wore on.”

Thiem showed all the class and clay-court prowess that has taken him to world No.8 and the French Open final as he beat Jordan Thompson 6-1 6-3 6-0 in 95 minutes.

A few early errors and struggles on serve soon disappeared as Thiem went on to hit 23 winners to Thompson’s five.

The rankings suggested Alex de Minaur would level the tie, but Australia’s world No.38 was unable to withstand a  Novak fightback as the Austrian, ranked 133rd, came through 3-6 6-2 6-3 6-2.

Novak played well above his ranking, taking charge with early breaks of serve in the second, third and fourth sets.

“He played some great tennis and I didn’t really step up to the plate,” said De Minaur. “I’m sorry, he was too good today.”

The large majority of the 6,000 spectators were naturally behind Novak.

“At the end of the day this is Davis Cup,” added De Minaur.

“Obviously I had home support playing in Brisbane and today I experienced the away support. Nothing wrong with it, it’s Davis Cup.”

Thompson is due to team up with John Peers against Oliver Marach and Jurgen Melzer in the doubles on day two, although nominations can change up to an hour before play starts at 10pm AEST.

Hewitt could yet decide to bring himself into the doubles pairing, while hopes are high that US Open quarterfinalist John Millman will have recovered from feeling unwell in time for Sunday’s reverse singles.

“It’s a must-win match for us tomorrow and we’ll go in and give it everything we’ve got just like today and see what happens,” said Hewitt.

“They’ve got a very good doubles team as well so we know it’s going to be a very tough match.”

Then winners of the tie will receive a rankings boost which could prove crucial ahead of February’s qualifying round for the new week-long 18-team Davis Cup Finals, scheduled for November 2019.

Peers: “Tommo and I played really well last time on clay in Belgium so we’ve got a lot of confidence going in together, we’ve done a lot of work over the last year or two in the Davis Cup squad together.

“I’m really looking forward to getting out there on Saturday and putting our best foot forward. I know them really well; Ollie has had a really good year and definitely dominated the first half of the year in doubles, and Jurgen has been the heart and soul of the team for years.”