Learning to juggle a professional tennis career with an ever-expanding portfolio of media, business and charity interests, Dylan Alcott is inspiring the next generation of wheelchair athletes in the process. 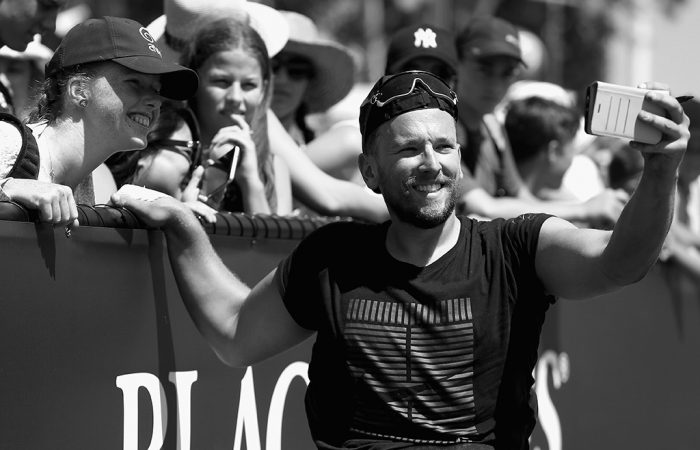 Dylan Alcott achieved another dream, and broke down yet another barrier, when he played tennis at Wimbledon.

The Australian wheelchair tennis star was one of four quad-division players to play an exhibition event at the All England Club during the 2018 Championships. It was a history making moment – the first time the quad division had featured on Wimbledon’s order of play.

For Alcott, it was another opportunity to shatter stereotypes and increase the visibility and profile of athletes with a disability.

“I’ve been lobbying to try and build the sport and to get our division in Wimbledon and to be here finally, it’s so cool,” he told tennis.com.au in London. “First and foremost we have the ability and skill to play on grass. There was a misconception that it would be too hard, but it’s not true. It’s easy, and I loved it out here.”

For more than three years, Alcott has reigned at, or near, the top of the quad wheelchair tennis game. With his singles and doubles gold medals at the Rio 2016 Paralympics, four consecutive Australian Open titles and a significant stint at world No.1 – first hitting the summit in June 2015 – the Melburnian’s profile has grown significantly. He has more than 100,000 followers across Twitter, Facebook and Instagram, where he announced he will be joining Channel Nine’s commentary team for Australian Open 2019.

VERY excited to announce I have joined Nine’s Wide World of Sports team for their coverage of the @australianopen!! Will be alongside Jim Courier, @dokic_jelena, @woodbridge.todd, @samgrothtennis, @rebeccamaddern, John McEnroe (huge) and many more! Bring on January!! @wwos @channel9 #ausopen

It’s not just his tennis-related achievements gaining him traction. Alcott last year begun presenting on radio station Triple J, featured in ANZ commercials and co-founded Get Skilled Access, a training program designed to improve accessibility between businesses and government and people living with a disability. His charitable organisation, the Dylan Alcott Foundation, aims to help young Australians with disabilities boost self-esteem and opportunities through sport and study. Alcott also launched the first “Ability Fest” in April 2018, a music festival accessible to everyone and inclusive of all that raised around $200,000 for the foundation.

“Just be yourself. That’s why I’ve had cut-through,” Alcott said. “I’m proud to be in a wheelchair and I talk about that on air. And I know people don’t normally hear that, but I am.”

Perhaps understandably, finding time to compete has been challenging. When Alcott has played in 2018 he has been practically unbeatable, winning four singles titles, building a win-loss record of 18-2 and sitting at world No.2. Yet he hasn’t played an officially-sanctioned match since winning the World Team Cup in May, where he went undefeated in singles and doubles (with Heath Davidson).

With just three tournaments remaining on his schedule, including the US Open and the Wheelchair Tennis Masters, Alcott will complete the season having played less than 10 tournaments. “I’m a bit of a Roger (Federer) now, just pick and choose the big ones,” he joked.

Alcott insists, however, that tennis remains a major priority.

“I still train every day,” he said. “Because I’m doing a lot of things (off court), everyone thinks I’m not hitting. I’m lucky that I have Heath at home (to train with). I also play sets against able-bodied players.

“I tell you what I don’t do – sleep. Much. I need to do more of that. But it’s so hard to give up the opportunities.”

Alcott’s coach Francois Vogelsberger says the 27-year-old learned the hard way the pitfalls of not dedicating himself fully to the game.

“We had an experience after Rio when he took some time off and he wasn’t competing or training,” Vogelsberger said. “I knew the US Open was coming up but I said, OK I’m gonna leave the experience (to him) and he’s gonna understand with experience. He came to the US Open having not played and he was shocking (laughter).

“I think that experience helped him realise that ‘maybe I can tweak my schedule, but I still need to train’. Because if he can’t do that, he can’t win. Since last year, even though his tournament schedule wasn’t full, he comes here (the National Tennis Centre) three times a week, regular basis. (Then) to prepare for the US Open, for the last three weeks he comes every day.”

Alcott recognises the importance of getting on court – it is here from which many of his opportunities stem. Having campaigned for quad inclusion at Wimbledon – where the event remains, for now, at exhibition level – he says a major boost for that cause came during his run to the Australian Open title.

“This year I played after Roger Federer on Rod Laver Arena, 12,000 people in the stadium, a million people watching on Seven. And guess who was in the front row? The chairman of the All England Club,” Alcott said.

“So if you’re trying to say to me that people don’t want to watch that, that’s not true. We’ve shown through the support of the Australian public that people care about what we do in our sport. So there’s no reason why the other Grand Slams shouldn’t follow suit.

“And that helps not only me, but hopefully the next young generation of athletes, even just kids with a disability, seeing someone like them on TV. I never had that, and it made it hard for me, because I didn’t know what I could do. But if a little kid sees, ‘oh there’s a guy in a wheelchair, I can do that’, that’s what’s it’s all about.”

Having a moment with the greatest champion of them all @rogerfederer #ausopen pic.twitter.com/k0IyrL1mQF

Former coach Greg Crump believes Alcott’s natural ability to self-promote, plus some fortunate timing, have combined to give wheelchair tennis a massive boost.

This is impacting positively on a younger generation of wheelchair players coming through Australia’s developmental pathway.

“That’s always been Dylan. Even when he was a kid, he was always years ahead in his age, hanging out with adults and always socialising,” recalls Crump, who worked with Alcott until the end of 2014.

“There may have been those players in the past but there wasn’t the vehicle for them to put their personality on show. You’ve (now) got the wheelchair tennis event fully integrated with the Australian Open and you’ve got a stage or forum to present it on as well. And social media 10 years ago (didn’t exist). He’s always tweeting stuff and doing this and doing that and he’s done that at a very young age to promote himself and create opportunities.

“The general public know that there’s wheelchair tennis now. It’s still a challenge … but you can’t buy that type of exposure as well, to get on prime time television playing tennis, that’s huge. The feedback (and) the number of people that rang in was outstanding.”

Added Vogelsberger: “We have for example Sonny (Rennison), a little six-year-old boy. Because Dylan is out there, it can help him dream about being Dylan. He can say, ‘wow I can be successful, I can be known by everyone, I can have an awesome life and still be in a wheelchair playing tennis’.

“And it’s Sonny, but it’s all our (young players). Riley (Dumsday, ranked No.7 in juniors) … he sees that and he says ‘wow, you can actually be a star in the wheelchair.’”