The concert is set to take place at the Darwin International Tennis Centre on Friday 7 September with free tickets available via Eventbrite from tomorrow, Tuesday 21 August. 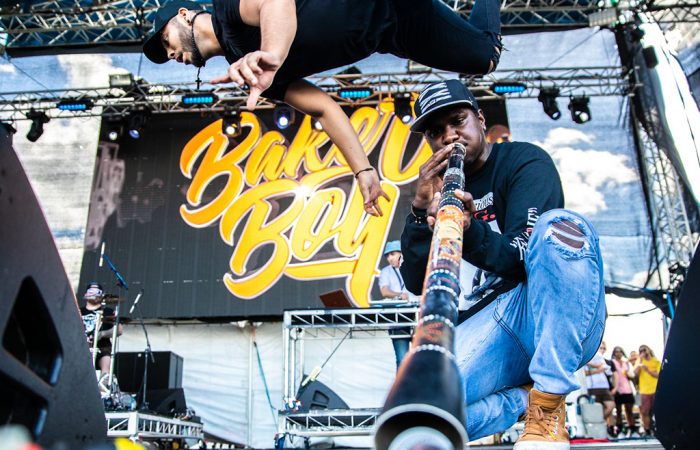 One of Australia’s most exciting up-and-coming hip-hop artists Baker Boy aka Danzel Baker will headline a free concert in Darwin as part of the National Indigenous Tennis Carnival.

The concert is set to take place at the new Darwin International Tennis Centre early next month with free tickets available via Eventbrite from tomorrow, Tuesday 21 August.

Since catapulting onto the scene in 2017, Baker Boy has established himself as one Australia’s brightest up-and-coming musical talents taking out the 2018 National Indigenous Music Awards Best New Talent earlier this month.

The 21-year-old was born in Darwin and raised in the remote NT communities of Milingimbi and Maningrida. His Arnhem Land heritage features heavily in his music which also incorporates his Yolngu Matha language.

Danzel Baker said he was looking forward to performing at the inaugural event.

“I’m so happy to be a part of the National Indigenous Tennis Carnival as it really is shaping up to be a great event,” Baker said.

“It’s really important for me to use my music as a platform to inspire younger generations to embrace their culture and become leaders in the community. It’ll be the first time I’ve performed at an event like this in my hometown so I’m really looking forward to it.

“I also think it’s really awesome that there is a free event like this for the community and I hope to see everyone get down to support, it’s going to be big!”

Tennis NT CEO Sam Gibson is excited to see Baker Boy perform and get involved in the event.

“Baker Boy is renowned for using his success to raise awareness of Aboriginal and Torres Strait Islander cultures through a range of artistic forms, so to have him headline a free community concert at the National Indigenous Tennis Carnival is fantastic,” Gibson said.

“Baker Boys’ music and mantra aligns perfectly with the essence of the Carnival and is why we were so glad when he decided to take part.”

The concert will be a free event taking place next month on Friday 7 September and a ticket will be required to enter. Free tickets must be requested via Eventbrite and will be available from tomorrow, Tuesday 21 August at 11 am ACST.

About the National Indigenous Tennis Carnival

The National Indigenous Tennis Carnival was launched last month alongside Evonne Goolagong Cawley and is a festival of culture and tennis expected to attract more than 180 participants from every state and territory and a further 3000 locals are estimated to attend the various public activities on offer across the four days.

In addition to the tennis, the Indigenous youth participants will be invited to take part in a range of cultural activities including dance, hip-hop, music, health education, sports leadership, Indigenous food and arts and craft workshops as well as the free community concert.

In addition to Friday, members of the community are also invited to the tennis centre on Saturday 8 September to experience market stalls, live entertainment, food offerings, watch tennis and participate in public workshops including an Indigenous Food Presentation.

Please note limited tickets are available and once capacity has been reached no further allocations will be made.