Barty moves on in Montreal

Ash Barty survives a tough fight against Romania's Irina-Camelia Begu to seal a place in the second round of the Coupe Rogers in Montreal. 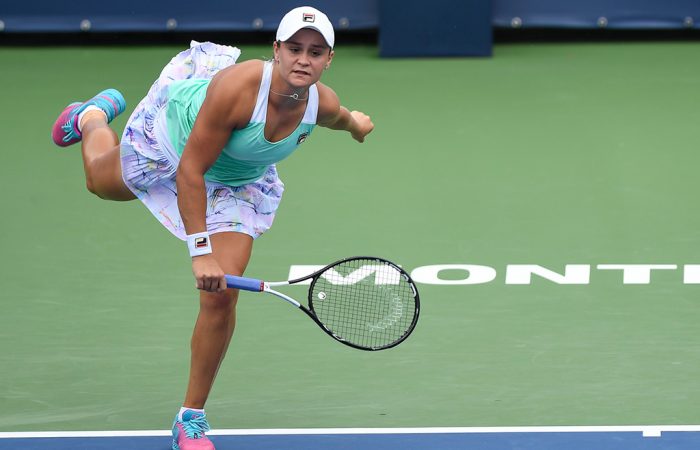 Australian No.1 Ashleigh Barty has bounced back from a second-set shellacking to advance to the second round of the Canadian Open in Montreal.

The 22-year-old Queenslander took the first set comfortably against Irina-Camelia Begu of Romania before surrendering the second and recovering to prevail 6-3 1-6 7-5.

Barty, who made the third round at Wimbledon last month, had five aces to Begu’s two and will next face Belgium’s Alison Van Uytvanck, who accounted for Russia’s Sofya Zhuk in straight sets.

Moving on in Montreal 🤗💦🎾🇨🇦 pic.twitter.com/L2SzILktDk

Elsewhere, Johanna Konta battled back from a set down to progress with victory over Jelena Ostapenko.

She will face the winner of wildcard Victoria Azarenka and France’s Kristina Mladenovic in the last 32.

World No.43 Konta began with plenty of promise, breaking her Latvian opponent twice to race into a 3-0 lead in just nine minutes.

Breaks of serve were a regular feature of the match though, and the 27-year-old lost her next three service games as 11th seed Ostapenko battled back and then edged the tie-break.

The next set followed a similar pattern to the first with Konta again winning the opening three games.

Ostapenko – who produced eight double faults in the first set – was unable to mount a fightback this time and the British player comfortably held on to force a decider.

Her dominance continued in the final set, securing three breaks of serve before successfully serving for the match to complete an impressive comeback.