Kyrgios has the tools for Wimbledon success, says Murray 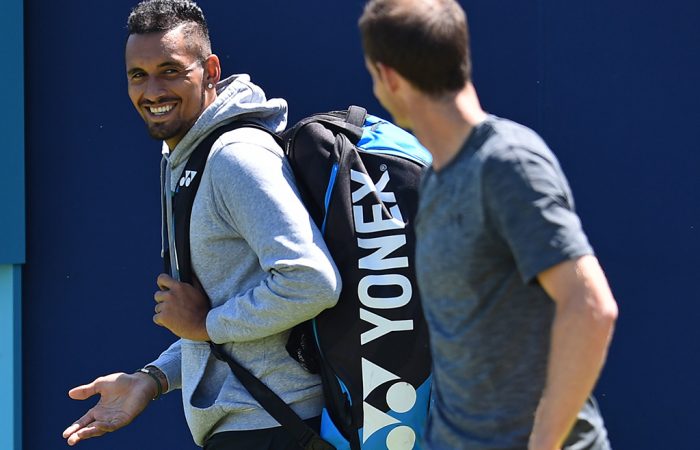 Two-time Wimbledon champion Andy Murray believes that if Nick Kyrgios maintains a big serve and a calm head, there is nothing stopping the young Australian from enjoying success at this year’s Championships.

Kyrgios reached the quarterfinals at the All England Club in 2014 and has twice since reached the last 16.

But he’s in a particularly rich vein of form this year, coming into the tournament after back-to-back semifinals in Stuttgart and Queen’s – his strongest ever build-up to Wimbledon.

“There’s absolutely no reason why (he can’t have his best Wimbledon), with his game, and the way that he can serve,” said Murray, who pulled out of the tournament on Sunday as he manages his return from injury.

“I think at Queen’s … he served over 30 aces in back-to-back matches. It’s incredible to be able to do that nowadays because the courts are not unbelievably fast. He’s not just doing that on his first serve. He’s hitting huge second serves as well.

“If he’s able to focus for three, four hours at a time, do it over the space of two weeks, there’s no reason why he can’t compete.”

Murray was one of Kyrgios’ victims at Queen’s Club; it was the first time in six meetings the Aussie had finally gotten the best of the Brit.

Kyrgios told the media on Saturday he was feeling good physically and considered himself a contender for the grandest title in tennis.

Murray, currently ranked No.156 as he makes his way back from a lengthy hip injury, says Kyrgios’ serve – and his mentality – would be the keys to his campaign.

“If you’re getting that many free points with your serve, they’re just aces. So 30 aces, let’s say in a two-set match, 24 points to win a set, that’s not including the ones that guys just touch and get a racquet on, you don’t actually have to win that many points and play that many long rallies and stuff,” Murray said.

“There’s no reason why he couldn’t have a really good run here. But the mental side of the game is huge and extremely important. He needs to prove that.”