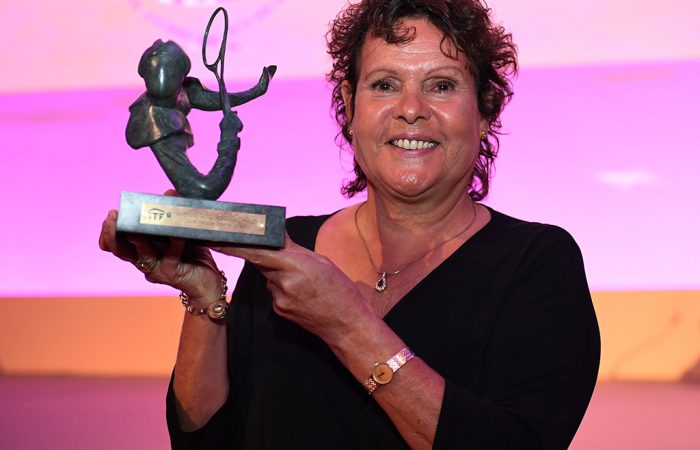 Australia’s Evonne Goolagong Cawley received the highest accolade in tennis when presented with the Philippe Chatrier Award by the International Tennis Federation (ITF) on Tuesday.

The seven-time Grand Slam singles champion was given the award at the World Champions Dinner in Paris for her services to tennis on and off court.

After a 16-year career that included seven singles, six doubles and one mixed doubles title at Grand Slams, she has worked to increase female participation in tennis in Australia, and as an ambassador for Indigenous Australians.

“As a child, I remember reading a Princess Magazine story about a young girl that was found, trained and taken to a place called Wimbledon where she played on this magical Centre Court where she won,” said Goolagong Cawley.

“I didn’t even know it existed but somebody came up to me and said that place is real. Every time I went to sleep at night I used to dream I was there and playing on that magical Centre Court. That became my dream.

“I achieved my dream of playing on that magical Centre Court and winning [in 1971 and 1980] and all my thanks goes back to the townspeople of Barellan [in New South Wales] who supported me. Without their initial support I wouldn’t be here today.

“We couldn’t afford it because we were a family of eight but the local townspeople put three of the Goolagongs through a week-long coaching school and later the farmers, policeman and the whole community would drive me to tournaments.

“After retiring and returning to Australia from America, I said to my husband Roger that I wanted to do for Aboriginal kids around Australia what the townspeople did for me.

“Thank you very much to the ITF. It’s amazing getting this award for playing tennis and doing the work with the Goolagong National Development Camp. Working with indigenous kids is something I truly enjoy and I’m passionate about.”