Stosur exits to Muguruza in Paris

Sam Stosur's 15th French Open campaign ends in the third round as Garbine Muguruza finds the form that took her to the 2016 title. 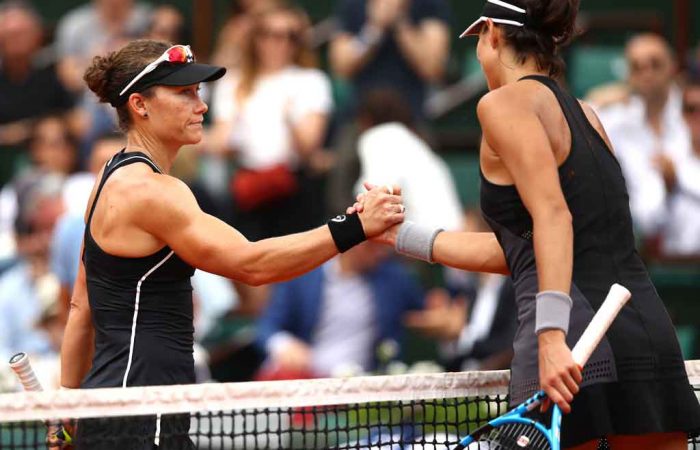 Sam Stosur’s 2018 French Open campaign ended in the third round as world No.3 Garbine Muguruza showcased the form that took her to the 2016 title in Paris.

Also the reigning Wimbledon champion and a recent world No.1, Muguruza overcame Stosur 6-0 6-2 in a Court Philippe Chatrier match on Saturday that left Daria Gavrilova as Australia’s last singles competitor in Paris.

Unable to defend the rankings points accrued from last year’s run to the round of 16, Stosur is projected to slip to No.101 in the world, her lowest position since 2008.

Since then, the 34-year-old has been largely entrenched in the world’s top 25 after reaching the 2010 title match in Paris, as well as four other semifinals, and hoisting the 2011 US Open crown.

Stosur has succumbed to the eventual champion in five of her past nine visits to Roland Garros and, on Saturday’s evidence, 2018 might prove the sixth time.

Muguruza, the only player to have toppled both Serena and Venus Williams in Grand Slam finals, conceded just 10 points in racing through the first set in 26 minutes.

Stosur avoided the prospect of a career-first double bagel as she recovered from a 0-2 deficit in the second set to finally get on the board.

The Queenslander briefly threatened a fight back when she broke Muguruza to level the set at 2-2, only for the third-seeded title favourite to reel off four-straight games to seal victory and a last-16 date with Magdalena Rybarikova or Lesia Tsurenko.

It was obvious from the outset that Stosur had her work cut out, Muguruza clubbing Stosur’s opening serve for a fierce backhand return winner to set the tone.

Forcing Stosur wide and deep beyond the baseline with her probing groundstrokes, Muguruza gained a break in the first game of the match.

Showing no let-up, the Spaniard broke Stosur for a second time to surge to a 4-0 lead.

Stosur tried everything but also had no joy advancing to the net, Muguruza firing shots past her before a double-fault from the Australian and forehand error surrendered a third break.

Muguruza served out the opening set before continuing the onslaught.