Should Jordan Thompson win his opening match the the ATP claycourt event in Houston, he'll line up against No.4 seed Nick Kyrgios. 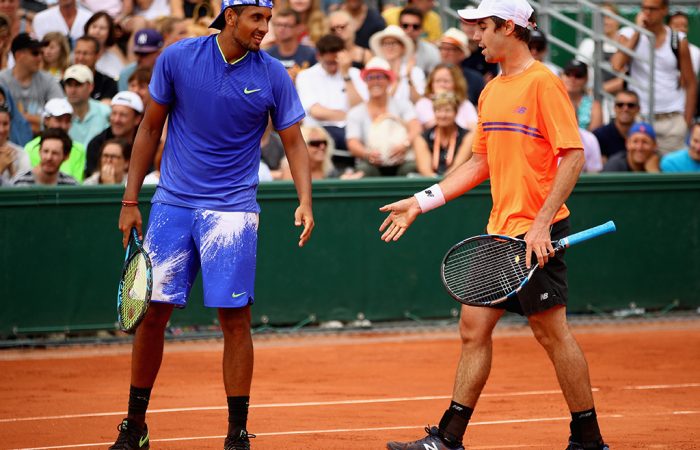 Nick Kyrgios and Jordan Thompson are headed for a second-round showdown at the US Men’s Clay Court Championship in Houston.

Thompson lines up against American Bjorn Fratangelo in the first round, with the winner advancing to a second-round meeting with Kyrgios, the fourth seed.

Kyrgios was a wildcard entry into the ATP 250 event, where he will make his debut.

Akira Santillan, on the comeback trail from injury, came within one win of joining his compatriots in the main draw, yet fell in the final round of qualifying to Stefan Kozlov.

At the WTA event in Bogota, Lizette Cabrera came through two rounds of qualifying to take her place in the main draw.

Cabrera, who won both her qualifying matches in straight sets, will take on Italy’s Jasmine Paolini in the first round.

Priscilla Hon reached the final round of qualifying at the same event before falling to Mexico’s Renata Zarazua.

Zarazua has drawn another Aussie, Ajla Tomljanovic, in the first round in Bogota; Tomljanovic is the No.8 seed at the International-level event and will hope to continue her winning ways after reaching the quarterfinals last week in Monterrey.

Also attempting to come through qualifying is Alex De Minaur, who is one victory away from taking his place in the main draw at the ATP claycourt event in Marrakech, Morocco.