Jaimee Fourlis and Ellen Perez will face off for the title of the second ITF Futures event in Canberra after each were successful in their respective semifinals on Saturday. 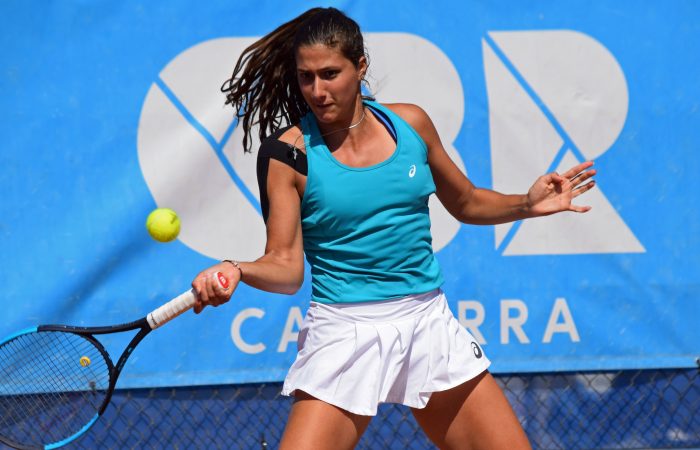 Jaimee Fourlis and Ellen Perez will battle it out in an all-Australian final at the ACT Claycourt International #2 on Sunday.

The training partners – who are shortly due to head to Europe together for three months of tournament play – were both successful in their semifinal bids, with Perez recovering from a slow start to oust second seed Eri Hozumi of Japan 7-6(3) 7-5 and Fourlis defeating fellow Victorian Zoe Hives 6-2 7-5.

Fourlis, seeded eighth, was elated after the victory. “Zoe is a quality opponent and I had to stick to my guns throughout the whole match and stay level-headed. I think I did that really well today,” she said. “She strikes the ball really well and I knew that I had to just stay strong and trust myself through every point.”

The teenager has been steadily improving each week on the Australian Pro Tour. “I’m just trying to build on my tennis,” she said. “I’ve played some quality opponents this week. Everyone here is very good in their own way so I think being able to back that up and to get to the final is very exciting.

“But there’s one more to go, of course, and I’m looking forward to that. I haven’t had a final in a long time, not since Perth two years ago. Ellen is playing really well at the moment so it‘s going to be a battle. I can’t wait.”

While coming in with a slightly higher world ranking (No.288), Perez, 22, lost to Fourlis in their only previous encounter. However, she arrives in the final in solid form having defeated a number of higher-ranked opponents during the week including Hozumi and third seed Jia-Jing Lu of China, who she eliminated in the quarterfinals in two tie-breakers.