Victorian Andrew Harris has reached the semifinals at the ITF Futures event in Mornington, his first tournament in six weeks after injury. 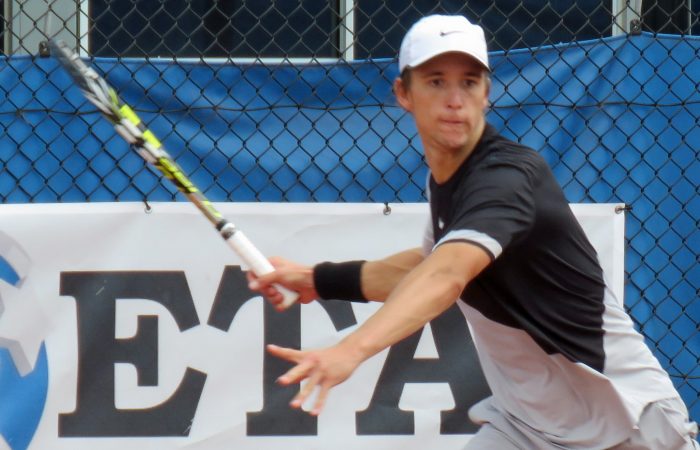 Andrew Harris has reached the semifinals of the Mornington Peninsula International #2 after recovering from a bone stress injury to his arm.

“I was playing some of the best tennis I’ve played and then I had to take a break to get my arm right, so here I am in my first tournament back in about six weeks,” Harris, 24, said. “I’ve had three good matches now so hopefully it keeps carrying on.”

The Victorian overcame some stiff resistance from Canberra’s James Frawley to post a 7-5 6-4 victory in just over two hours. “It was a real battle today so I’m happy to get through it,” he said.

“I last played Marc in the semifinals in Launceston and he got me,” Harris said. “He’s a great player but I know what to expect. Every point is going to be tough and I’ll really have to fight.

“I believe I can win but it’s obviously going to be a difficult match. Hopefully I can get some revenge.”

Polmans’ ominous form continued on Friday when he dispatched the unseeded Matthew Dellavedova 6-3 6-4 to reach the last four.

The remaining semifinal will see the resurgent Matthew Barton take on last week’s finalist and No.3 seed Max Purcell.

Barton backed up his first-round win over South Australian Luke Saville by upsetting second seed Andrew Whittington in a deciding set tiebreaker. The big-hitting Sydneysider recovering from a set down to take the match in a thriller 3-6 6-3 7-6(5).

Purcell was clinical in his win over Blake Ellis, eliminating the sixth seed 6-1 6-3.