Barty into Miami Open fourth round

Ash Barty moves into the last 16 at the Miami Open where she will face No.4 seed Elina Svitolina - who got past another Aussie, Daria Gavrilova, in three sets. 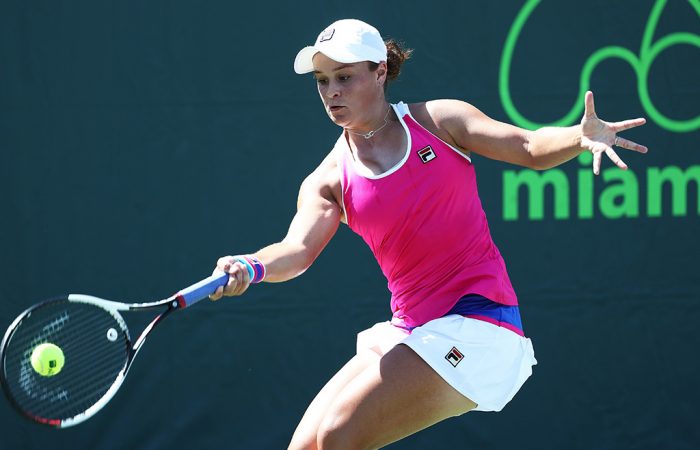 Ash Barty knuckled down on Sunday to oust a dangerous opponent and move through to the fourth round of the Miami Open.

The Queenslander, seeded No.21, beat the in-form Petra Martic 6-4 6-3 to set up a meeting with fourth seed Elina Svitolina.

Svitolina recovered from a set down to beat Barty’s compatriot Daria Gavrilova 4-6 6-0 6-1.

In a physical encounter lasting more than two hours, Svitolina extended her head-to-head record over the Australian to 5-2.

Barty, meanwhile, trailed 4-2 in the opening set against Martic, who last week reached the quarterfinals at Indian Wells.

But from there, Barty reeled off six straight games to open a 6-4 2-0 lead, and broke serve again in the fourth game of the second set to run away with victory in a crisp 71 minutes.

The 21-year-old has never before beaten Svitolina, losing all three of their meetings in 2017.

On Monday in Miami, two more Aussies – Nick Kyrgios and Thanasi Kokkinakis – will attempt to emulate Barty in reaching the fourth round at Crandon Park.

Kokkinakis takes on 31st seed Fernando Verdasco while Kyrgios, the 17th seed, will line up against No.15 seed Fabio Fognini in a match scheduled for Stadium 1.

Barty will battle Svitolina on the same day for a quarterfinal berth.