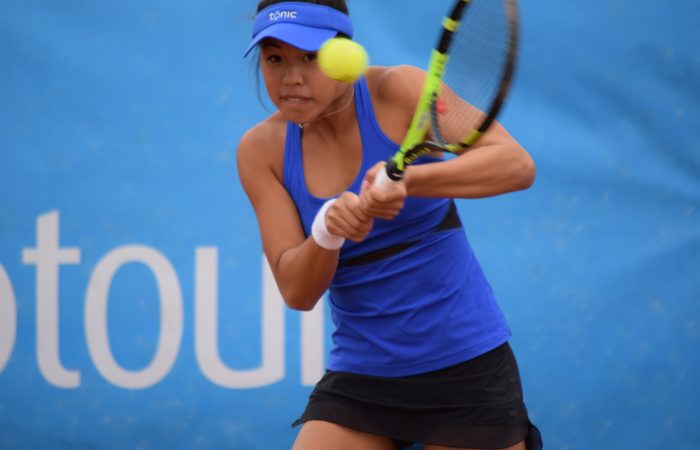 Lizette Cabrera enjoyed a straight-sets win in the opening round of the ACT Claycourt International #1 on a windswept Wednesday, defeating Switzerland’s Karin Kennel 6-1 7-5.

“I feel like I’ve been back to Canberra so many times but it’s always good to be here,” said the Queenslander. “I don’t mind the conditions. I know it’s going to be the same for the other player so I just do the best I can with it.”

After somewhat of a break-out year on the WTA Tour in 2017 in which she rose as high as world No. 134, the 20-year-old said the start of this season has been quite different.

“It’s been tough,” she said. “I’ve been really close in some matches and just not getting over the line but I feel like I’m doing all the right things. I just have to keep going and things will start to swing for me.”

“I expect more of myself now that I know what the level is like on the WTA Tour and how doable I think it is for me,” she added. “Maybe I put too much pressure on myself and set goals instead of just focusing one match at a time, but I’m definitely excited for what the year has in store for me.”

“There’s always a little bit of pressure coming to an ITF event back home,” Cabrera said. “I just purely wanted to play this tournament to get some matches in because I haven’t had that many yet this year.

“It’s a solid draw and there’s definitely a good opportunity to get some competitive matches in.”

Earlier on Wednesday, Jaimee Fourlis impressed in her upset of Japan’s Risa Ozaki, the Victorian dismissing the third seed easily, 6-2 6-1, while Priscilla Hon (No.8) put in a dominant display to defeat in-form Brit Katy Dunne for the loss of just a single game.

Alison Bai was unable to keep local hopes alive, the Canbrerran falling to Ellen Perez after taking the first set in a tiebreaker, 6-7(4) 6-3 6-1.