Sam Stosur fights back from a set down to make a winning start against American Lauren Davis in Indian Wells. 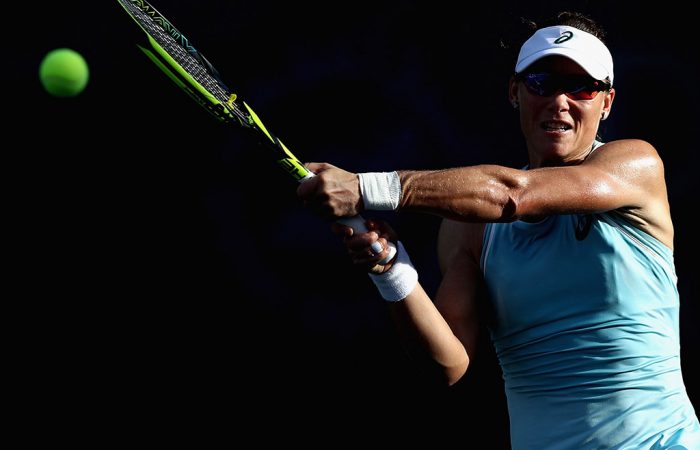 Sam Stosur fought back to beat American Lauren Davis and reach the second round in Indian Wells.

The Australian number three came through 3-6 6-3 6-3 in the Californian desert, extending her unbeaten record against Davis to 4-0.

Stosur, a former semi-finalist and doubles champion in Indian Wells, has now won four of her last five matches and will face French 14th seed Kristina Mladenovic in round two – another player Stosur leads 4-0 in career meetings.

Asked if her record against Davis played a part in Wednesday’s match, Stosur said: “Maybe towards the end of the second set that became a little bit more true, but I think the second and third I definitely came out playing a bit more aggressive.

“I love it here. Anywhere you’ve been able to play well in the past makes it good coming in every year.”

Davis took the first set with a run of four straight games after Stosur played a poor service game, dumping a backhand smash into the net to lose it to love, in game seven.

The Aussie responded with a key break at 3-2 in the second set, following a Davis double-fault, and saw out the set after coming through a tense game at 4-2.

And it was Stosur who made the decisive move in the third after breaks were swapped early on, edging a tight contest with a final tally of 24 winners and 33 unforced errors to 22-38 and 11 double-faults from the American.