An excited Nick Kyrgios aims to continue a career-best Australian summer as he returns to his beloved Davis Cup. 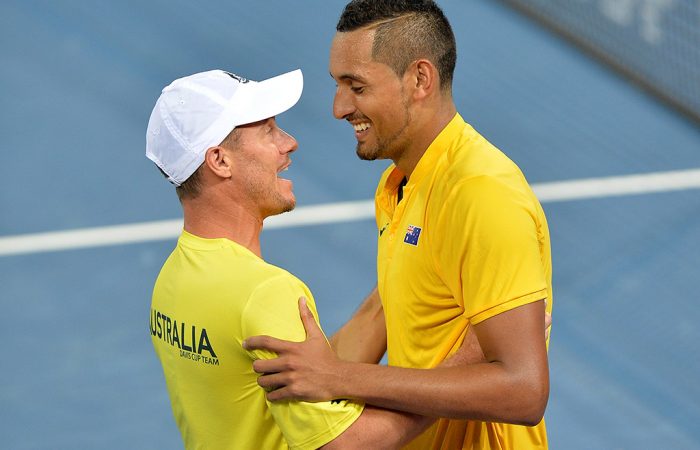 A return to happy hunting ground Brisbane has provided a fatigued Nick Kyrgios a timely boost ahead of this week’s Davis Cup first round tie with Germany, Lleyton Hewitt says.

The Australian team captain admitted they would have to monitor the world No.14 after Kyrgios backed up his Brisbane International triumph with a gutsy fourth round finish at the Australian Open.

But Hewitt had no doubt Kyrgios would be primed for the first round tie starting on Friday, saying the Australian No.1 was excited by the prospect of extending his domination of Pat Rafter Arena.

Kyrgios, 22, only has fond memories of the venue after claiming both singles rubbers in Australia’s Davis Cup triumph over the United States last April before his Brisbane International breakthrough earlier this month – his first title on home soil.

“He’s had a big summer so we will monitor him and make sure he gets through, (but) he will be ready come Friday,” Hewitt said of the dual grand slam quarterfinalist.

“He was excited when we decided to come back to Brisbane and play Davis Cup.

“And he was happy to come back and play the Brisbane International this year after the Davis Cup success (against the USA).

“The feels he got from playing here, it gives him a lot of confidence.

“Plus it’s a court that suits his game and serving style.”

Kyrgios improved three places after going into the Australian Open as the world No.17 where he was beaten in four tight sets in the fourth round against then-world No.3 Grigor Dimitrov.

Kyrgios also drastically improved his public image, emerging as a fan favourite 12 months after he was booed on court at the Australian Open.

Hewitt hinted that Kyrgios would have pulled off the transformation earlier if the public knew what the 22-year-old did behind the scenes.

“It (Kyrgios’ attitude) has been good. For me, it’s been good a lot of the time,” Hewitt said.

“Obviously he has a couple of down times during the year at stages but they are always highlighted as well.

“But people probably don’t give him the credit he deserves for the stuff he does throughout the year.

“He’s unbelievable with the junior kids and he has been fantastic for our guys in the Davis Cup team.”

The draw for the first round tie will be held on Thursday.