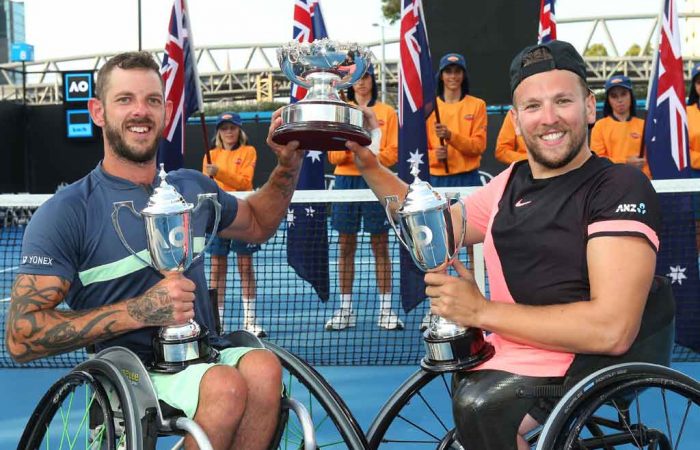 Following their singles contests, Alcott and Davidson returned to court in a gruelling 6-0 6-7(5) 10-6 triumph over Andrew Lapthorne and David Wagner.

Remarkably, Alcott lost nine Grand Slam doubles finals prior to the match, but was relieved to finally get over the line in front of a packed-out crowd.

“It’s been amazing for so many of you to come out and watch us in this incredible atmosphere,” said Alcott, addressing the crowd. “It’s changing the face of wheelchair tennis. It means the world to us. Heath, love you, so proud of what we’ve managed to do.”

The 30-year-old clinched a maiden win over the world No.2, setting up a must-win clash with compatriot Alcott on Friday.

“It feels awesome. On a home court, my second full Aussie Open, I’d never beaten Lapthorne before, so I’m very happy to get the win,” reflected Davidson.

“We’ve played a number of times, I’ve got him to tie-breakers, but I’ve never been able to get over the line. It’s a massive confidence booster for me.

“At the last change of ends I was just saying to myself ‘it’s just another game mate,’ I kept my cool, played some good points. I kissed my frame at the end because that final shot was yucky!”

Triple defending champion Alcott and Davidson are both level on one win and one defeat during the group stage.

“It’s great I’m still in the tournament, it’s going to be an interesting one against Dylan tomorrow, one of my best mates,” added Davidson.

“I love playing him, we train together the whole time. It’s one of those things, it’s always good. We’re going to be out there trying to take each other’s heads off,” joked the home wildcard.

Alcott put in a sensational performance to save four match points in a pulsating two-and-a-half-hour marathon with top seed Wagner, but was eventually ousted 6-4 6-7(4) 6-4 by the American.

“I had those match points, but I couldn’t think too much about them. I know it’s a big point, but I had to look at it as just another one. It was frustrating but it’s not over until it’s over. I know it’s cliché, but that’s tennis,” said three-time Australian Open champion Wagner.

“I knew he wasn’t going to give up, so I had to fight for every point.”