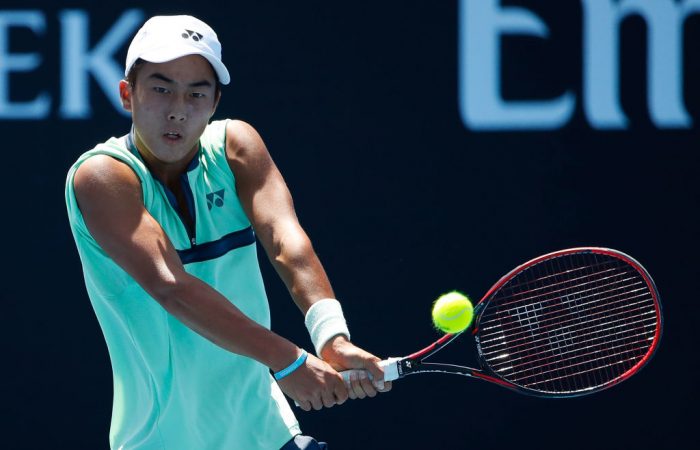 Rinky Hijikata has continued his stunning run at the Australian Open with a 6-4 6-3 win over Drew Baird to reach the boys’ singles quarterfinals.

Hijikata will take on Great Britain’s Aidan McHugh in the final eight after beating the American in 59 minutes.

The pair began strongly on serve, going nine games without a break to open the match, and the set seemed to be edging towards a tiebreak. But Hijikata thought otherwise, as he broke in the final game to take the decisive lead.

He began the second in dominant fashion, racing out to take a 5-1 advantage before Baird was able to make the scoreline more respectable, claiming consecutive games before the Sydney native served out the encounter.

Hijikata hit just five unforced errors in the second set, and his consistency on court proved to be too much for his American opponent to handle. Nevertheless he was surprised that he made such a low number of mistakes.

“I’m pretty stoked to get through, I thought I performed really well today and I can’t wait to get back out there,” he said.

“I tried to be pretty aggressive today and applying myself point in point out which is what I’ve been working on. I think I did that pretty well today and the consistency was pretty good.

“IThat’s probably one of the best matches I’ve played,” he added when told about his unforced error count. “I don’t think I’ve ever done that before.”

In the girls’ singles draw, 16-year-old South Australian Amber Marshall’s run came to an end against American Dalayna Hewitt, who claimed a 7-5 6-2 win in just over an hour.

The Australian was on the counter early, with Hewitt opening up a 5-2 buffer in the opening set. However Marshall was not to be deterred, hitting some startling winners and levelling proceedings in the opener.

With things getting tense, the American’s booming serve and groundstrokes proved to be too much for the Australian to handle, as she claimed the opener with a break in the final game.

The second set began with an exchange of breaks early before the American pulled away for a 5-1 lead. Marshall managed to break late but was unable to hold her serve, with Hewitt finishing the match in style to move through to her first Grand Slam junior quarterfinal.