A full Aussie wrap of the juniors action at the Australian Open. 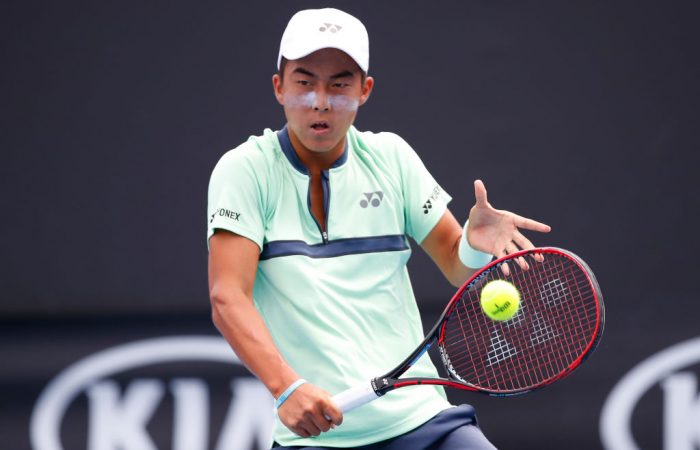 The second round of the Australian Open junior draw kicked off on Day 8 at Melbourne Park, with three home-grown talents looking to book a berth in the last 16.

New South Welshman Rinky Hijikata was first up on Court 8 against Brazilian Matheus Pucinelli De Almeida, and despite losing the opener claimed a hard fought 4-6 6-4 6-4 victory in just over two hours.

In the humid Melbourne conditions, the match was instantly intense as the pair engaged in long rallies that would tire professionals. The Brazilian 16-year-old broke Hijikata in the early stages and held on to claim the opener.

But the 17-year-old Australian was not to be deterred, fighting back to claim the second stanza and push the encounter into a deciding set.

It was Pucinelli De Almeida who looked the better player early in the third, claiming the early break and taking a 2-0 lead before Hijikata clawed his way back once again to level proceedings at 2-2.

The brutal rallies continued as the enthralling contest reached its climax, and it was Hijikata who claimed the break in the final game of the match to seal a stirring victory.

The Australian hunched over after securing the win and received treatment immediately at the conclusion of the match, but insists it was only cramp and that he will be fine for his next match.

“My body is feeling a lot better now than it was a couple of hours ago,” said Hijikata, who will take on American Drew Baird in the third round of the competition. “I just started cramping in my legs deep in the third but everything’s sweet now. I should pull up fine for the next match.”

On the girls’ side, opening-round hero Gabriella Da Silva Fick put up a brave fight in her 6-4 6-2 loss to Italian Elisabetta Cocciaretto.

The Aussie began well, grabbing a break early in the first set, but Cocciaretto soon turned up the heat, putting on a returning masterclass to win five of the last six games to take the opening set.

The Italian began the second in phenomenal fashion, breaking in the fourth game before repeating the effort en route to victory.

Having played quality tennis, Da Silva Fick remains positive after the loss and says that if she had her time again she would try to enjoy the moment a little more.

“She played really well and I was expecting that. I think I was a bit too self-focused throughout the match,” she said.

Da Silva Fick hopes to gain more match experience in the coming season: “I didn’t play a lot of tournaments or a lot of matches, but just developing my game and my skills,” she said of her 2017 season.

“Hopefully this year I’ll play a lot more matches this year and gain the match confidence and match fitness. Hopefully I’ll improve throughout the year.”

In the other singles result, 15-year-old Annerly Poulos fell to Japanese No.5 seed Naho Sato 6-2 6-1, but certainly turned heads with her ball striking at such a young age.

In boys’ doubles results, all-Australian duo Jayden Court and Alexander Crnokrak reached the second round, but fellow Australian duo Tristan Schoolkate and Will Hann were eliminated.

Thomas Bosancic was also in doubles action, but he and British teammate George Loffhagen were unable to progress, while Hijikata was also unable to replicate his singles success with Japanese teammate Taisei Ichikawa.