Osaka fired 24 winners en route to victory against the Australian No.1. 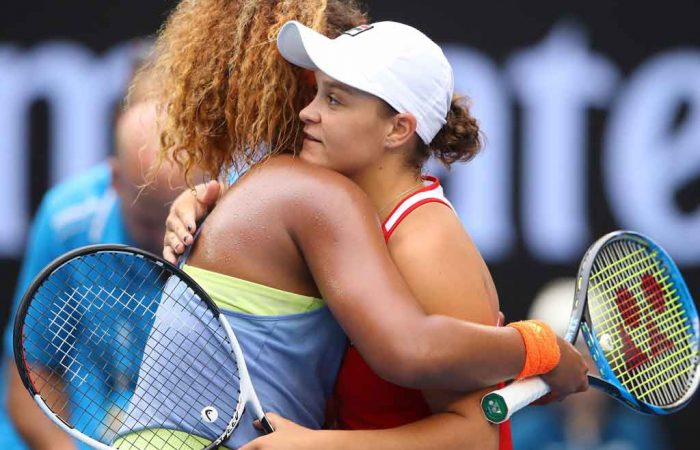 Ashleigh Barty is out of the Australian Open after falling victim to the awesome firepower of Japan’s Naomi Osaka.

Unseeded Osaka crunched clubbed 12 aces and 24 clean winners past Barty to send Australia’s No.1 charge out 6-4 6-2 in a third-round defeat on Saturday.

“In my eyes, it certainly was a very even match. Naomi played a great match. Especially in times when I was able to have my nose in front, she served great and came up with the goods,” reflected Barty.

“I’m obviously very happy with my first couple matches. Even tonight, I don’t think I did a hell of a lot wrong. I think if Naomi plays like that, she beats a lot of players,” added the 21-year-old, insisting she had plenty of opportunities to wrestle the momentum away from the Japanese prodigy.

“I wasn’t able to get into too many of her service games. I had a sniff at a couple games, 15-30s, 30-All points. But she served great and played the big points well tonight.

“Sometimes you just have to tip your hat to your opponent.”

Osaka’s reward is a shot at world No.1 Simona Halep for a place in a Grand Slam quarterfinal for the first time in her career.

“I feel really happy but I’m also kind of sorry because I know you guys wanted her to win,” the 20-year-old told the Australian crowd on Margaret Court Arena.

“So thank you very much because I’ve never played in an atmosphere like this before.

“I’ve always wanted to play against an Australian player because on TV it always seems really cool.”

Barty, who reached the final in Sydney (l.to Kerber), is determined to take the positives away from her stint on home soil.

“I think as any professional athlete, you can be on a massive high, and it can all come crashing down in one day. Today, that was my day,” explained the 18th seed. “Wasn’t a good day at the office for me. But we’ve still had a pretty unbelievable summer.

“I would have loved to have gone deeper and obviously still be in the tournament come the second week, but wasn’t meant to be.

“I think we can certainly be proud of what we’ve achieved in these last few weeks and look to move forward for the rest of the year.”