Kokkinakis returned to his home Grand Slam for the first time since 2015. 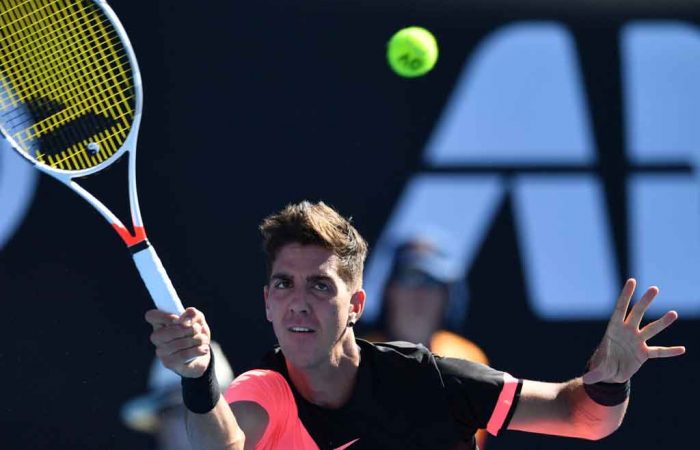 It was a second blow for local fans by Medvedev, who beat Australian prodigy Alex de Minaur in the final at Homebush last week.

“Credit to him, he was better than me,” admitted Kokkinakis. “He played the big points better, he took his chances. I didn’t. That’s how it goes.

“I have to stay on the court, keep working, play some more matches, more tournaments, keep trying to play week after week. Hopefully by then, by the next sort of Slam that rolls around, I’m in better shape.”

Kokkinakis looked in control of the third set tiebreak, racing to a 3-0 lead but the Russian reeled off the next six points.

Kokkinakis then saved four set points including three in a row with both players sending down some cracking winners.

But world No.53 Medvedev wouldn’t be denied, with his lethal backhand sealing the set.

“As soon as I lost that third set, I knew I was in a bit of strife. I didn’t feel great physically. Obviously he had a lot of matches,” added Kokkinakis.

Medvedev then broke early in the fourth and rumbled down an ace on his first match point to seal a second round with Next Gen prospect Hyeon Chung.

The Kicker backhand was in full flight and a series of crisp volleys helped catapult the world No.93 Argentine to a comprehensive 6-3 opener.

Kicker, who has never featured in the main draw at Melbourne Park, doubled his advantage with 10 winners.

Thompson managed to haul himself back from a 0-2 deficit last year at the Australian Open in a first round triumph over Joao Sousa.

It looked an impossible task down an immediate break in the third set, but Thompson, buoyed by a raucous home crowd, rattled through three breaks to extend the encounter.

Once again the 23-year-old was down 0-2, but canvassed the court to claim back the initiative. Thompson struck a hold to love to force a decider and marched back to his seat with a steely look in his eye.

The match hinged on a gladiatorial 12-minute Kicker service game at 2-2. Six break points were surrendered as the Argentine escaped to power over the first hurdle.

Earlier on Tuesday, French Open boys’ champion Alexei Popyrin demonstrated his promise in an absorbing first round with fellow wildcard Tim Smyczek, with the American posting a 6-3 6-7(14) 6-3 6-3 triumph.