It was the first time an Australian female has featured in the Sydney International final since 2005. 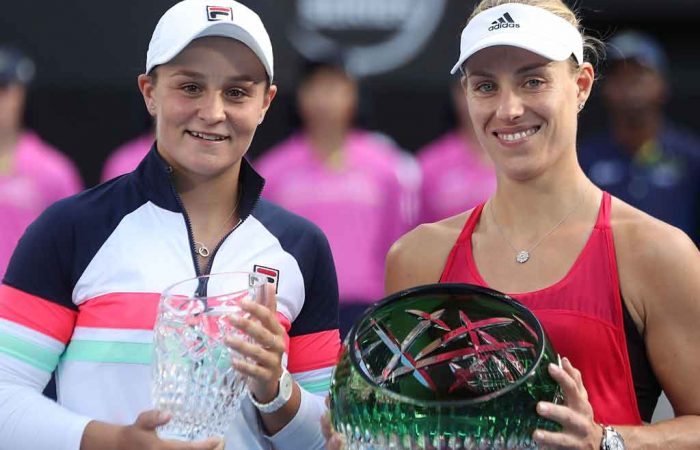 Barty fought hard on Saturday in muggy conditions but was no match for the German two-time Grand Slam champion’s experience, going down 6-4 6-4 at Sydney Olympic Park.

It is Kerber’s 11th career title and her first since the 2016 US Open.

It also marks the ninth-straight singles win of her 2018 reawakening, a display that confirms she means business in next week’s Australian Open.

In the end, Kerber’s on-court composure was what counted against her younger counterpart, earning three championship points and claiming the silverware at the first opportunity.

Barty, who’d been looking to become the first Australian woman to win in Sydney since Alicia Molik in 2005, could convert only one of seven break points, while racking up 38 unforced errors to Kerber’s 13.

Nevertheless, her appearance in the tournament decider will lift the 21-year-old Queenslander’s world ranking to No.17 as she embarks on a home slam campaign flush with expectation.

“I felt like it was a pretty good level,” Barty said.

“To be honest, I felt like I probably played some of the better tennis that I have this week.

“And Angie is on fire. She’s such a competitor and makes you work so hard for each point.”

But she was left to rue her failure to convert, double-faulting to give the German the valuable early break and a 3-2 lead before going on to take the set.

Barty’s big first serve helped her but Kerber was the more composed and was not put under pressure when the Australian had the chance.

That script appeared set to continue when Barty was broken with little resistance to go down 1-0 in the second set, but she returned the favour with venom to break Kerber to love.

Down another break and serving to stay in the match, Barty dug out the fighting spirit her fans had grown accustomed to, although it was not enough to outlast her opponent’s dominance.