I stay tough, give nothing away: De Minaur

Alex De Minaur is about to contest the biggest match of his rapidly ascending career. 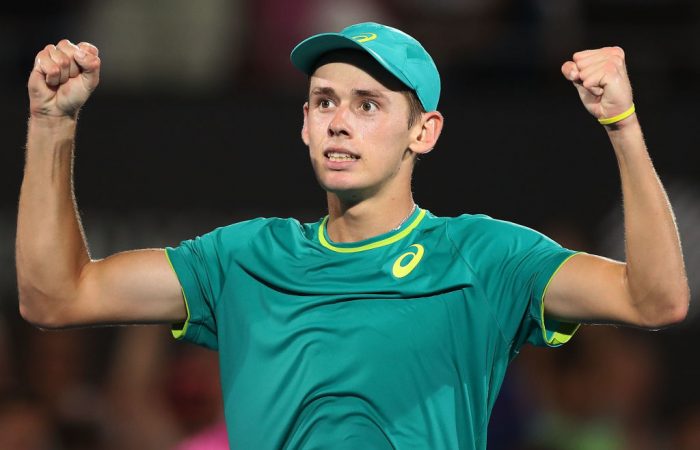 Off the court, Alex De Minaur reacts as one would expect from a teenager who’s just become the youngest player in nearly two decades to make a Sydney International final.

On it, his composure belies his 18 years and world No.167 ranking.

De Minaur is about to contest the biggest match of his rapidly ascending career and, come the end of Saturday night’s decider against Daniil Medvedev, could find himself the holder of a maiden ATP title.

Eleven wins from his past 12 matches. Six of those top-50 scalps. A Brisbane International semi-final. And now this.

Even he wouldn’t have picked it a few weeks ago.

“It’s crazy. I didn’t expect it at all, but I have just been riding this wave,” de Minaur said.

“I have been doing all the right things, so I’m very pleased at what I’m able to accomplish.

“It’s something you look forward to when you’re a little kid, and I’m glad I’m in this position right now.”

Part of what’s got him there – the remarkable talent aside – has been his complete lack of intimidation by opponents boasting bigger names and rankings.

The quality of De Minaur’s victims over the past fortnight – world No.23 Milos Raonic, No.40 Fernando Verdasco and No.36 Feliciano Lopez, to name a few – speaks volumes.

Friday night’s impressive come-from-behind display against Frenchman Benoit Paire showed he also has the capacity to dig deep under pressure, to not crumble.

It’s an attitude partly ingrained by mentor Lleyton Hewitt, the last person to make the Sydney International final this young when he won it in 2000.

“(Hewitt) tells me just pretty much to stay tough, to not give anything away,” de Minaur said.

“To show players in the locker room that this is my brand of tennis, what I come up with every time I step out on court.

“It’s about showing that presence, and that’s what I’m trying to pride myself on.”

While world No.20 Tomas Berdych awaits in the first round of next week’s Australian Open, the focus for now is Medvedev.

“I’m sure we are both going to come out swinging.

“It’s just tennis at the end of the day. You each are trying to hit a yellow ball over the net, that’s how I try to look at it.

“You get out there on court and you leave it all out there. Then whatever happens, happens.

“But it’s just another match. If you give it your all, then there’s nothing to worry about.”