Alex de Minaur has promised to go big at next week's grand slam in Melbourne. 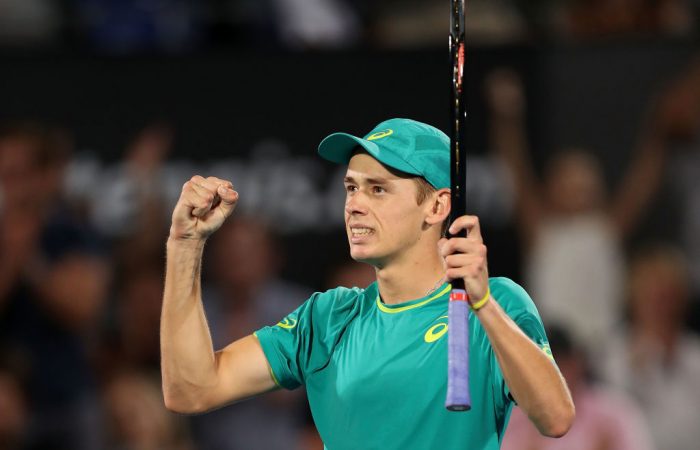 He might be one of the smallest men in the draw but Australian teen sensation Alex de Minaur has promised to go big at next week’s grand slam in Melbourne.

De Minaur has become a star of the Australian summer after reaching the semifinals of the Sydney International to back up his final-four showing in Brisbane.

Now the 18-year-old will look to advance to his maiden ATP tour final when he meets the 42nd-ranked Frenchman Benoit Paire in what is expected to be a packed Ken Rosewall Arena on Friday night.

“He’s a very talented player. Has a very high level. I’m just going to go out there, try to weather the storm, and try to play my game,” de Minaur said.

He heads into the match high on confidence after seeing off veteran Feliciano Lopez – his fifth straight top-50 scalp – in dominant fashion.

Despite being on the end of a barrage of 200km/h serves all night, de Minaur, who entered centre court to the tune of New Sensation, stayed firm.

“It was lots of fun,” he said, smiling. “I reckon it’s probably my latest night I played, and it was great to play in front of such an energetic crowd.

“Especially to play on your home court, it meant a lot for me to get that win.

“After every point and every game I’m out there, I’m learning, taking it all in. I know how to deal with different types of situations now. This is just really helping me.”

After starting the season ranked 208 in the world, de Minaur is expected to rocket up the rankings ahead of next week’s major at Melbourne Park.

His list of victims, which includes established players Milos Raonic, Fernando Verdasco and Damir Dzumhur, is growing with every tournament.

And while he refuses to look too far ahead, he insists he is unafraid of the bigger names, beginning with his first match-up in Melbourne: world No.20 Tomas Berdych.

“Obviously a very tough match, but, look, I’m looking forward to it. It’s going to be a great opportunity for me,” he said.

“I can’t wait to get out there on court in my home slam and show everybody what I’ve got.”