Daria Gavrilova will move through to the Sydney semi-finals after her win over Samantha Stosur. 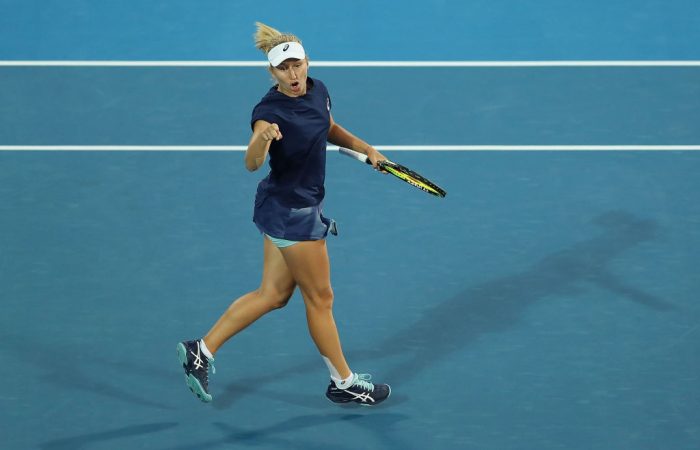 Daria Gavrilova has breezed past compatriot Samantha Stosur and straight into her first Sydney International semi-final.

Stosur started freely and confidently, stealing the first break to go 3-1 up in the first set, but Gavrilova turned up the heat to break straight back and dug deep with her service game under pressure.

The contest appeared delicately poised at 3-3 in the opener but a host of unforced errors undid Stosur’s bright start, and the more the 33-year-old was challenged by her decade-younger compatriot the less answers she had to offer.

Stosur would not go quietly, breaking back and then holding serve as her opponent stuttered and double-faulted, but her attempt at a comeback ended there.

“I had chances on every serve of Sam’s, and I felt like I was in every game and I was still playing good tennis,” Gavrilova said.

“I just made less mistakes and I was more focused on what I had to do. Made a lot more balls and made her miss a few.”

The result means Gavrilova will enjoy a match-free Thursday, after which she’s in with a genuine shot of winning her first WTA title on Australian soil.

But she won’t get the chance to test her Australian Open credentials against world No.3 Muguruza, who pulled the pin with a thigh injury.

She revealed she’d overheard the news just before the start of the match.

“I would still want to play I think, but I mean, it is a bonus,” Gavrilova said.

“I can just work on a few things tomorrow with my coach and have a lighter day.”

There is now the enticing prospect of an all-Australian semi-final, should Ashleigh Barty win her quarter-final against Czech veteran Barbora Strycova on Thursday.

Such a situation would ensure a local contests Saturday’s final.