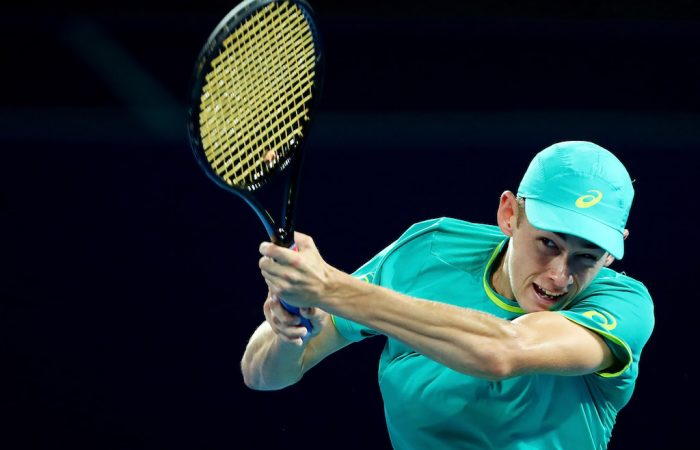 Australian teenager Alex De Minaur has stunned Milos Raonic to earn a spot in the Brisbane International quarter-finals with a stirring straight-sets victory.

The 18-year-old wildcard muzzled the Canadian’s powerful service game to prevail 6-4 6-4 on Wednesday night and score by far the biggest win of his burgeoning career.

A quivering De Minaur was struggling to come to terms with what he had accomplished after the match.

“I honestly cant believe it,” he said on court.

“It’s going to take a while for me to believe what’s happened just now.

“I was going to come out here, compete my hardest and give it my all and I actually ended up playing an unbelievable match.

Raonic was clearly rusty in his first singles match since October last year, making 18 costly unforced errors to just one.

It will be his first ATP quarter-final appearance.

The Spain-based Sydney product had already caused a first-round boilover in beating American Steve Johnson and looked in the mood to add an even more impressive scalp to his collection.

He thumped his chest after breaking former world No.3 Raonic in the third game and defended three break points of his own to take the first set at Pat Rafter Arena.

Raonic, the 2016 champion in Brisbane, was shellshocked by De Minaur’s ability to consistently return his booming serve.

He mounted a late resistance by breaking De Minaur for the first time in the match in the eighth game of the second set but couldn’t hold him out, with the youngster needing only one match point to notch the upset.

It’s an unexpected roadblock for Raonic, who battled wrist and calf problems in an injury-riddled 2017 and arrived in the country before Christmas to give himself a long lead-in to the Australian Open.

De Minaur booked himself a spot at the grand slam by winning the wildcard playoff at the end of last year and is on six-match winning streak.