After disappointments in different age-group events last week, Dane Sweeny and Annerly Poulos rebounded to triumph in the 16/u Australian Championships. 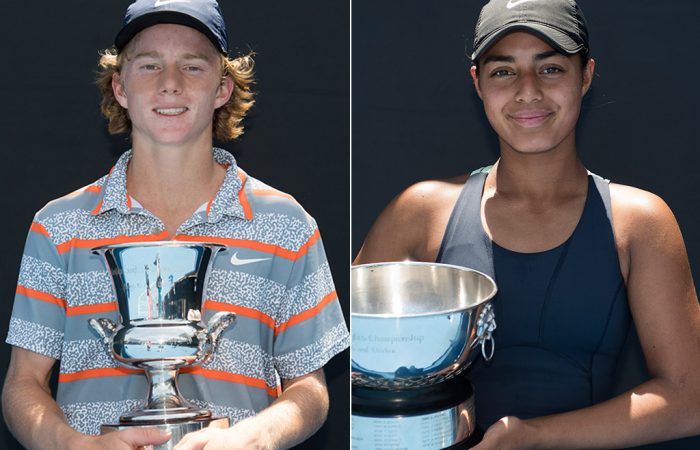 Queensland’s Dane Sweeny and the ACT’s Annerly Poulos have won the 16/u Australian Championships on Sunday at Melbourne Park.

Sweeny bounced back after a disappointing 18/u campaign and was outstanding all week, not dropping a set until the final on Sunday.

“I have been playing some great tennis. Under 18s was a bit of a shocker, just not playing the way I wanted to. (In the) 16s I took the pressure well and competed as best I could which is all I can do.”

After playing Hijikata during the 18/u Championships, Sweeny was able to rectify his mistakes and impose a more effective style of play.

“I had played him in the 18s event last week and I was playing a bit too aggressive,” Sweeny said.

“I knew I had to play my game a bit more and not as aggressive, just make balls, run all day, hit the ball when I need to, come into the net and just serve good spots.”

With the win, Sweeny has been awarded a wildcard into the Australian Open junior main draw.

He hopes that the Australian Open can be a stepping stone in what he hopes will be a big year.

“My goal is to play every slam next year and that is what I am working hard to achieve,” he said.

It was a much easier win for 16/u girls qualifier Annerly Poulos, who was too strong for fifth seed Zara Brankovic in winning 6-0 6-2.

Poulos has had a dominant couple of weeks during the December Showdown; after finishing runner-up in the 14/u Australian Championships, she then went through qualifying for the 16/u event then knocked out four seeds during the main draw on her way to the title.

“I’ve been here for quite a while but especially after 14s the loss in the final that pushed me even harder to do well in the 16s,” she said.

The win gives Poulos plenty of confidence going into next year, where she is hoping to take her game to the next level – starting in January as a wildcard in the Australian Open girls’ singles event.

“I’m definitely going to start playing Australian Open juniors and hopefully if I do well in that to keep playing well in that, play pro circuits and the pro tours and play harder matches and get better as a player,” she said.