Grand Slam Dunk a first for tennis and basketball 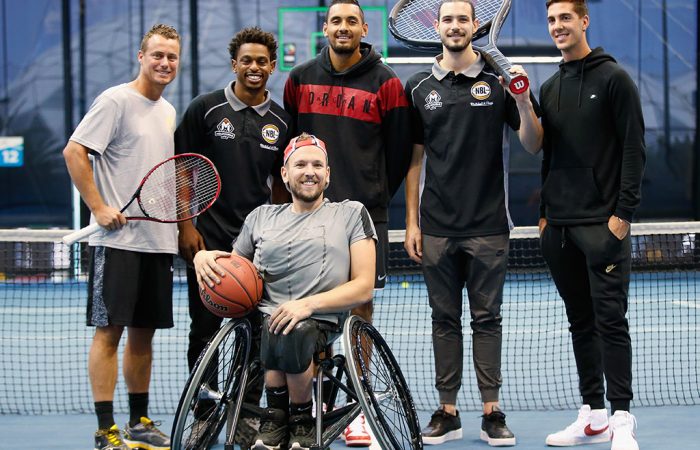 Tennis Australia and the National Basketball League have teamed up for a Grand Slam first at Australian Open 2018.

In a win for sports fans, NBL teams Melbourne United and the Cairns Taipans will play an official match, dubbed the AO Game, at Hisense Arena in week two of the Australian Open.

Fans will be able to attend both the Australian Open and basketball on Wednesday 24 January 2018 for the special price of just $60 for adults and $10 for children.

Tickets will provide a Ground Pass to the Australian Open as well as entry into the AO Game at Hisense Arena from 7.30pm.

“This is a unique opportunity to showcase two of the world’s biggest sports in one location on one day and our fans are the big winners,” Australian Open Tournament Director Craig Tiley said.

“Working with the NBL, we have been able to schedule the AO Game in the second week of the Australian Open to give everyone a chance to enjoy both sports in the one precinct at great value.

“Combining two sports is a Grand Slam first and part of our commitment to bring more entertainment to what is already Australia’s biggest sporting event.”

Added NBL Chief Executive Jeremy Loeliger: “We are excited to be part of Australia’s biggest sporting event and for fans to have the chance to watch world-class tennis and basketball on the same day.

“We are expecting the AO Game to be a sell-out so we urge fans to get their tickets quickly and come along and enjoy a great day at the tennis, followed by a night at the basketball.”

The Melbourne-Cairns game was originally scheduled for the State Netball and Hockey Centre on 14 January due to the unavailability of Hisense Arena.

The Melbourne United-New Zealand Breakers game originally scheduled for 25 January in Auckland has now been brought forward to 18 January.

“I want to thank Tennis Australia and the NBL for the opportunity to be part of what should be a special event for the people of Melbourne,” Melbourne United Chief Executive Vince Crivelli said.

“Our home court, Hisense Arena, opens up an extra 6500 seats than a game at a smaller venue, so we can showcase our exciting sport to even more event lovers in January.”

Tickets for the AO Game, which includes an Australian Open Ground Pass, will go on sale at 9am Monday 11 December 2017 via Ticketek.

Melbourne United Reserved Seat Members can register to attend the game between 1.30pm Wednesday 6 December and 9am Monday 11 December. All other members must purchase a seat through Ticketek.