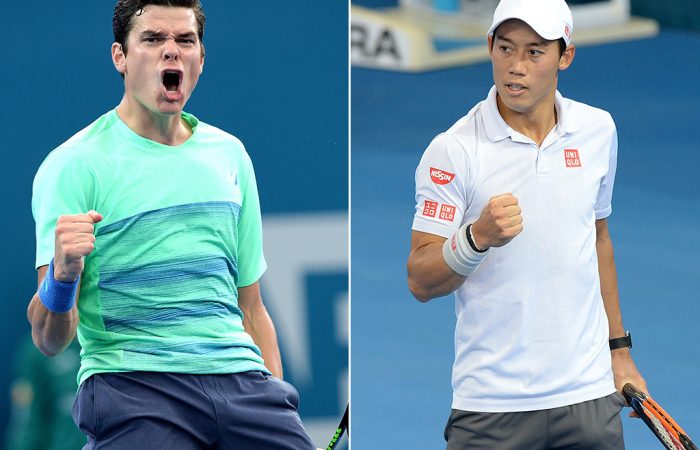 Raonic, the former world No.3 who defeated Roger Federer (SUI) in the 2016 Brisbane final, is heading back to the tournament for the fourth time.

“It’s been a tournament I’ve always played well at and felt good about my game, so that definitely adds to the appeal of coming back year after year,” Raonic said.

“As far as the tennis goes the conditions are ideal for preparing leading into Melbourne and the whole Australian swing I think it’s the best way to start off alongside the best players in the world.”

The 26-year-old believes Brisbane is the ideal way to start the season, both on and off the court.

“For me it’s the ideal way to start off the New Year, not only the tournament on its own, but the city itself is a fantastic place to get out of the cold and come and enjoy the warmth.”

Meanwhile, 2018 will be the eighth time Nishikori has played Brisbane, a tournament he regards warmly as one of his favourite events on the calendar.

“I always enjoy the Brisbane International tournament. I always spend a great time in Brisbane there is plenty to do, good food, good location and it’s a good facility,” Nishikori said.

“I try to find a good restaurant every day, I spend most of the time trying to eat Japanese food and there are good Japanese restaurants, and walking around the city is also fun.”

Nishikori, who fell to Grigor Dimitrov (BUL) in this year’s final, says his aim is to go one better in 2018.

“I hope I can make the final, but my goal is to win the tournament. It’s the first tournament of the year so I’ll try and have a great tournament this year.”

The announcement of Raonic and Nishikori adds to a stellar men’s field that is headlined by world No.1 Rafael Nadal (ESP), Andy Murray (GBR), top ranked Australian male [21] Nick Kyrgios and defending champion and world No.6 Grigor Dimitrov.

Tournament Director Geoff Quinlan says with so many top class players, fans will be spoilt for choice come January.

“With such a quality field there will be fantastic matches at Pat Rafter Arena all week,” Quinlan said.

“Both Raonic and Nishikori are former finalists here and fans are now familiar with how exciting and formidable both players are on the big stage.

”Raonic was a champion here in 2016 when he beat top seed Roger Federer, while Nishikori made the final last year and will be gunning to win his first Brisbane title.”

Tourism and Events Queensland Chief Executive Officer Leanne Coddington said the addition of Milos Raonic and Kei Nishikori to an already top-class line-up would be a major drawcard for tennis fans across the country.

“The Brisbane International attracts some of the world’s best players to start their season and we are delighted to have a former champion, Milos Raonic and finalist, Kei Nishikori, join this line-up in 2018,” Ms Coddington said.

“The Brisbane International is a key highlight on the It’s Live! in Queensland major events calendar that attracts strong crowd numbers.

“We invite fans to enjoy a week of world class tennis and some of the unique and unrivalled tourism experiences during their stay in Brisbane.”