Ash Barty is closing in on an invaluable top-16 ranking after reaching the semifinals of the WTA Elite Trophy in Zhuhai. 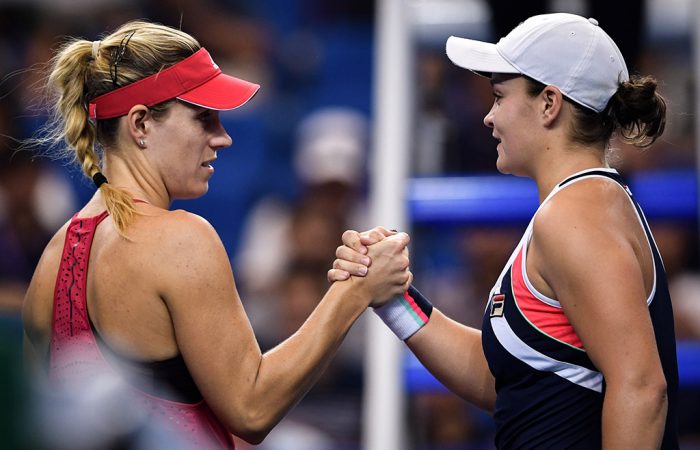 Ash Barty’s rapid rise up the women’s tennis rankings is not done yet, with the rejuvenated Australian poised to finish the season inside the world’s top 16.

The 21-year-old added another top-20 scalp to her burgeoning 2017 collection on Thursday in China, outplaying former world No.1 Angelique Kerber 6-3 6-4 at the WTA Elite Trophy tournament in Zhuhai.

The win takes her through to Saturday’s semifinals after Wednesday’s 6-4 6-1 defeat of world No.14 Anastasia Pavlyuchenkova.

Barty had started the week ranked a career-best No.20 but she has jumped four spots on the live rankings with back-to-back wins.

There are many permutations, given the round-robin nature of the Zhuhai tournament, but no matter what transpires leading up to Sunday’s final, Barty will push for a top-16 seeding at January’s Australian Open.

That would see her avoid players ranked in the top eight until at least the fourth round.

“It’s not something that I look at before matches, before tournaments, anything like that,” Barty said of her ranking surge.

“It’s just a nice surprise the next Monday or Tuesday, depending on where you are in the world.”

Barty’s win – her ninth this season against top-20 opponents – was a symbolic one, after the Ipswich talent saw her first tournament of 2017 end in a tight three-set loss to Kerber in Brisbane.

Kerber was world No.1 and Barty ranked 271st in their January encounter. Thursday’s loss will likely result in the German dropping below Barty and possibly out of the top 20.

The Australian only returned to tennis in early 2016 after a season playing cricket in the women’s Big Bash League for Brisbane Heat.

She said cracking the top 100 for the first time this year was a weight off her shoulders, and that she now felt comfortable among the world’s best.

“(Before leaving tennis for cricket) I felt like a top-100 player, but I think your ranking truly reflects where you are,” Barty said.

“When I was younger, I wasn’t ready to be a top-100 player, probably more mentally and emotionally than anything.

“Breaking into the top 100 this year was a big barrier for me, just to sort of get the monkey off the back.

“I just feel like now, when I walk out on the court, I’m comfortable and confident against whoever I play.”

Her Saturday opponent won’t be known until round-robin matches are completed on Friday.