We caught up with Australian teen Lizette Cabrera, who after a breakthrough 2016 has made an increasing impact on the WTA tour this season. 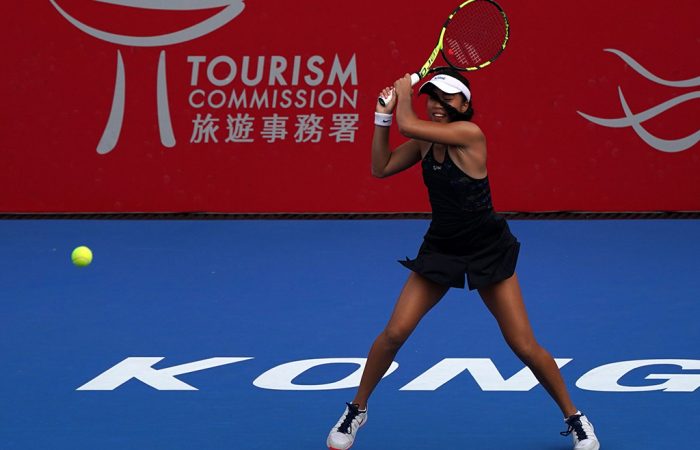 In 2015, Australian rising star Lizette Cabrera finished the year with a world ranking of 1062. One year later she climbed up to world No. 256, and this year the 19-year-old sits at world No.137 with a bullet headed for the top 100.

For comparison’s sake, the current world No.1, Romanian Simona Halep, was ranked No.210 at Cabrera’s age.

Cabrera has enjoyed a breakthrough year in 2017. Since making her WTA debut at the Brisbane International in January, she later went on to make back-to-back quarterfinals in Guangzhou and Hong Kong.

She also experienced the best tennis memory of her young career in January.

“Playing at the Australian Open in the main draw for the first time was very special to me. It’s always been a huge goal of mine and seeing my family and friends in the stands was really great,” the fifth-ranked Australian woman told tennis.com.au.

In 2016, she picked up two ITF singles titles in Tweed Heads and Brisbane.

Cabrera is a fluid-moving, graceful tennis player who has an exciting artistry about her shots. She favours her forehand and looks to play quick, dynamic points rather than slogging it out with her opponent.

Her favourite surface is grass, and she tries to models her game off two-time Australian Open champion Victoria Azarenka.

“I love the way [Azarenka] she comes across on the court, she’s really gritty and moves really well. She doesn’t have a huge serve but she positions it really well.

“I think my strength is my forehand and I use the court really well. I also think I have good perception skills.”

Like most teenagers, Cabrera also has weaknesses that she’s trying to address. “My serve is getting there but it’s not the best right now,” she said.

What is perhaps unique to some of her Australian peers is Cabrera’s love for tennis. She’s not a robot who plays tennis 24/7 but she lives and breathes the sport and is always looking at ways to get better.

“I think a healthy balance is important but I love tennis. I’m always looking at who is playing and I’m watching it all the time on TV or checking live scores,” Cabrera said.

She may be laid back but that is not to be mistaken for complacency. In fact, she is one of the more driven tennis players to have come through the Australian ranks; in the short-term, she aims to crack the top 100.

Long term? She wants to climb the highest possible mountain in tennis.

“It’s ambitious, but I want to win a Grand Slam and become No.1 in the world,” she revealed.

As a child, Cabrera discovered tennis through her parents’ love for the game, and by 12-years-old she realised she was good enough to pursue a professional career. After growing up in Townsville, she moved south to train frequently at the National Academy in Brisbane.

Since turning professional in 2012, Cabrera has loved every minute of life on tour. She relishes the opportunity to see the unique sights and sounds of the world, and getting to hang out and play with, and play against, her Australian and international friends.

“The best thing about tennis is being able to compete and travel around the world and meet new people,” she said.

“I speak with Sam (Stosur) and Ash (Barty) and Dasha (Gavrilova). We all talk; we’re all great friends. I also have a lot of great friendships from overseas players; one of my good friends from Croatia is Jana Fett and [American] Caroline Dolehide. I’ve met some really cool people travelling.”

As for coping with the rigours of the tour and the expectations that come with being ‘next-big-thinged’, Cabrera follows one piece of important advice given to her by her boyfriend, American Nathan Pasha, who is ranked No.642 in the ATP world tour.

“You have to love the process more than the result.”