Doubles act for Kokkinakis in Traralgon 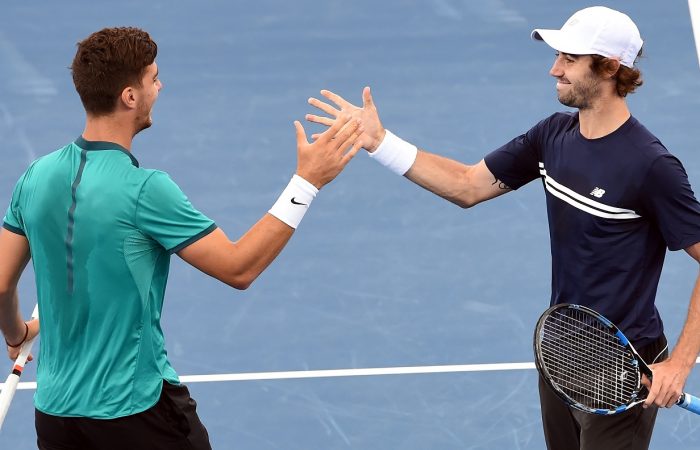 While continuing to manage his return from a persistent groin injury, Thanasi Kokkinakis has entered the doubles with Jordan Thompson at the Latrobe City Traralgon ATP Challenger this week.

Kokkinakis, 21, has not seen competitive play since the US Open in late August. “I was getting a bit sick of just training to be honest,” he said. “I’m still trying to get my groin in the right place for singles and I don’t want to overpush it, but I was in Melbourne, and Traralgon is close so I thought I would just break it up a bit and play some doubles.”

“I’ve been playing with the injury all year and I missed the end of last year with it as well,” Kokkinakis added. “Sometimes it flares up and other times it’s good so I’ve just got to stay on top of it.

“I’ve got a pretty extensive rehab program. I’m just trying not to play too much and push myself too hard, and then end up compromising the off-season. I’m doing my best to try to start my pre-season strong.

“I’m just trying to take it day-by-day and enjoy it out on court a little bit when I can.”

Thompson and Kokkinakis enter Traralgon seeded fourth and have already enjoyed some stellar success, defeating dual Grand Slam duo Pierre-Hugues Herbert and Nicolas Mahut on their way to the Brisbane International ATP title at the start of 2017, in what was their first-ever tournament together.

“We might be playing together for a bit of the summer,” Kokkinakis said of their partnership. “We can play some good doubles and hopefully we go alright this week.

“It’s great to play with a good mate as well.”

Thompson, the tournament’s top seed and last year’s winner, will open his singles campaign against veteran Michal Przysiezny of Poland. Should he be successful, the world No.76 will then meet the winner of Banes and Bourchier before a potential quarterfinal contest with American No.6 seed, Evan King.

Other first round match-ups of note include in-form Victorian wildcard Andrew Harris – already a title winner on the Australian Pro Tour this season in Toowoomba – taking on the No.4 seed Mitchell Krueger of the United States.

Wildcard Ben Mitchell continues his return to the professional ranks when he meets another American in fifth-seeded Noah Rubin.