Finally overcoming the physical problems which have for years plagued her promising career, Storm Sanders has discovered newfound success in the tandem game. 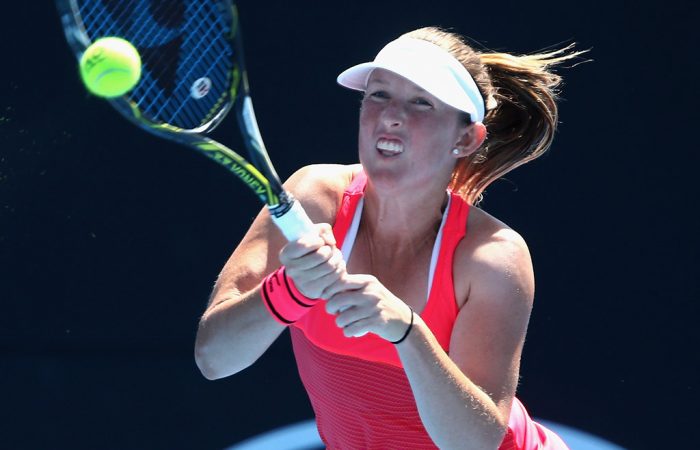 Almost four years ago, when still only a teenager, Storm Sanders verged on the top 200.

She’d won a round at the WTA event in Hobart, been named on the Australian Fed Cup team, and looked to be on track to rise higher.

Unfortunately, injury struck. And they niggled away at her for the next few years. There were ankle injuries. A troublesome back. Later, an abdominal issue. It robbed her of consistent play on tour, and the ability to build momentum and confidence.

Thankfully, her body is cooperating more in 2017, and she’s built a fruitful doubles partnership with fellow Australian Monique Adamczak. Together, they won their first WTA title in Nottingham in June and more recently reached WTA finals in Tokyo and Guangzhou. They are now inside the top 30 in the WTA team rankings – also known as the Race to Singapore.

Sanders chatted to tennis.com.au about her unlikely rise in the tandem game and how she still hopes to achieve similar success in singles.

You’re the world No.63 in doubles now. How does it feel to have such a high WTA ranking next to your name?

“It’s pretty crazy actually, because before Wimbledon in about June, my doubles ranking was like 190-200, and I wasn’t planning on playing much doubles – I wanted to focus on my singles. Monique messaged me and she’s like, hey, do you want to play? I think we could play really well together. So we organised to play Strasbourg (a WTA event) and we lost first round but we felt good on court – I really liked playing with her, and we had a connection and played pretty well. So she asked if I wanted to play the grasscourt season. I was actually wanting to go home; I wasn’t really sure if I was going to stay in Europe. I gave it one more week; I thought I’d see how that goes, see how I’m feeling, and we ended up winning the ($100,000 ITF Surbiton) tournament. So I was like, OK I’ll stay, I’m feeling good and we’re playing well together. And then we ended up winning our first WTA title (in Nottingham) and then qualifying for Wimbledon, so it was kind of crazy and also quick to get those results. It’s been really good playing with Monique, we obviosuly get on really well on and off the court, so that obviously helps a lot.”

You guys are now No.27 in the WTA Race to Singapore. Although you won’t qualify there, that’s pretty impressive.

“We saw that as well and we’re like, wow that’s crazy … we’ve only played a handful of tournaments together and I think if we’d had the chance to play the US Open together – which we unfortunately didn’t get in to – if we’d won a few rounds there we would have had a huge chance, but this late in the season unfortunately a little too late, but next year hopefully. But still pretty crazy.”

Will you commit to playing more doubles together in 2018?

“Yeah definitely. Both our rankings are high enough for Slams now for next year and maybe WTA Premier events. But we definitely love playing together and we want to commit and try and do really well. But obviously I still want to focus on my singles as well, so I’m gonna have to sit down with Mon and we have to work out a schedule where I can commit to both doubles and singles and try and balance that … if I can get into main draw in doubles Slams, that will also be a priority.

How will you balance singles and doubles, given your rankings for both are so different?

“Yeah it’s gonna be quite tricky, because my singles ranking (currently No.624) has dropped because I haven’t played as much. Whereas before I could play doubles at a WTA event and also get into qualifying in singles. Now I won’t be able to get into WTA qualifying events in singles. I’m really going to have to sit down and look at where I want to focus on doubles and where I want to focus on singles. Because I love playing singles and I really want to play if my body’s healthy and will kind of let me play. Definitely for the rest of this year I want to focus on singles, so I’m planning to do that.

You had a good singles result on the Pro Tour recently, reaching the quarterfinals in Brisbane. How encouraging was that and how are you feeling about your singles game?

“Yeah it was very encouraging. I played a few good matches in Brisbane, which was really nice to get out there and play well and feel really good on court. I think doubles success has actually really helped my in singles; we’ve been playing some really good players in doubles – we beat Johanna Konta, beaten (Yanina) Wickmayer, Alison Riske, so if we’re beating those top players in doubles I can ask myself ‘why can’t I do that in singles?’ I was disappointed not to play Toowoomba (on the Pro Tour), but I was going to be in qualifying and I’d pulled up quite sore in my ab, so I would have only had a day off and played potentially two matches on Sunday. So I didn’t want to take that risk and knock out the rest of the year, so we thought we’d just pull back this week and hopefully go again in a few weeks.”

Where are you at physically, generally? Better now than a few years ago?

“Generally I’ve been feeling a lot better. A few years ago I was struggling with a lot of different injuries – they’ve always been tough ones as well. Not one, simple clear-cut (injury), like you’ll have 10 weeks out and then you’ll be back. It’s more, OK, we’ve gotta see, it’s a niggle, we’re not really sure, just kind of have to play it by ear … having to guess along the way almost. Just kind of annoying things that stop your momentum. So you play two weeks and you have to have three weeks off because you’re just not quite ready to play. It was very tough mentally for me, but I have a very good team in Melbourne who have working really hard to help me get back on court soI’m very lucky and thankful for their support. This year has been a pretty good year – touch wood (laughter).

How good has this year been mentally for you, competing regularly and scoring some good wins?

“It’s been really great for me this year. Because knowing that I can set up a schedule where I’ll be playing at the Grand Slams in doubles, it inspires you; I feel actually belong here because I’ve made it on my own ranking into the Grand Slam main draw in doubles. I think this is the first time in maybe four or five years where I’ve actually gotten towards the end of the year and haven’t had to stop in August or September. Every year I’ve had to stop and take six to eight weeks out for injury or something happens. This is the first year where I’ve been able to play and travel overseas and go to Asia and play WTA events there. I’m hoping next year I can also get my singles ranking higher so I can play some WTA singles as well and not just the doubles.