West Australian Astra Sharma arrives in Cairns after a break-out week, reaching the final of her first ITF $25,000 tournament in Toowoomba. 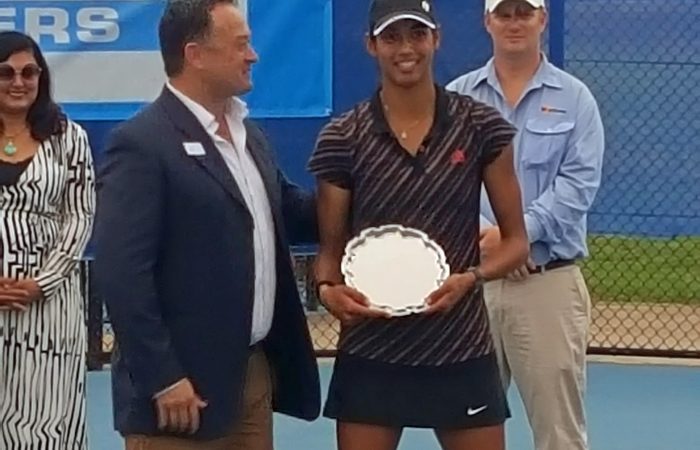 After consecutive victories over Brisbane and Penrith title winners Kimberly Birrell and Olivia Rogowska on her way to a maiden final in Toowoomba last week, the 22-year-old product of Vanderbilt University in Nashville, Tennessee – where she earned singles and doubles All-American honours this year as well as being named SEC Player of the Year – enters the Cairns Tennis International riding a wave of confidence.

“I was happy to go out and compete with such good players last week. It was a good opportunity for me,” Sharma said. “I have a lot of respect for them and they were really close matches.”

The current world No.552 had never been past a second round of an ITF $25,000 event before and said that it was a goal of hers for these Australian Pro Tour tournaments to get past that mark.

“I’m a little surprised that I surpassed that by quite a bit,” she added.  “I’m just happy with my process at the moment. It was really good to get on court and play some relaxed tennis and the results followed which was nice.

“I will definitely try and continue with it in Cairns. Getting more matches at that kind of level would be great.”

Sharma finds herself up against the tournament’s No.6 seed in Japan’s Yuuki Tanaka in her first round encounter and, should she be successful, will be on track for a potential quarterfinal showdown with fourth seed Tammi Patterson.

Beyond that may lurk in-form Australians Ellen Perez – a semifinalist in Toowoomba – and second seed Olivia Rogowska.

Top seed Asia Muhammad and Birrell headline the first round with the winner to face either wildcard Genevieve Lorbergs or Japanese qualifier Ramu Ueda.