World No.1 Rafael Nadal proved too strong for the eighth-seeded Nick Kyrgios, winning the China Open in straight sets. 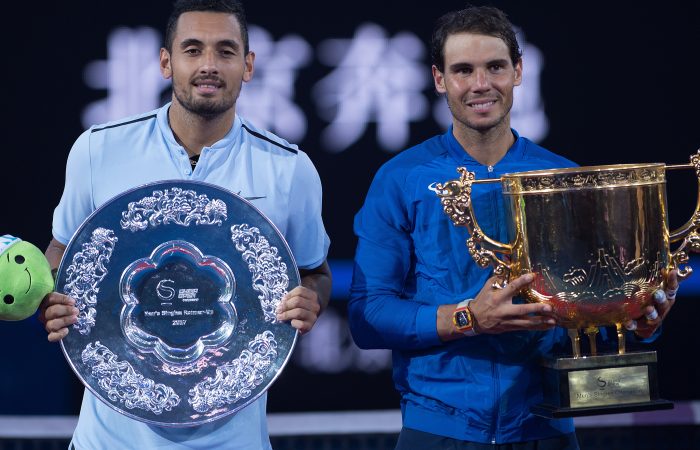 A disappointed Nick Kyrgios conceded he was outclassed by world No.1 Rafael Nadal in the China Open final.

Nadal was at his relentless best as he recorded a 6-2 6-1 victory in 92 minutes to win his sixth title of the season.

“He played well. I played terrible,” Kyrgios admitted after the match.

“He’s in great form. He just destroyed me today, so too good.”

This is what Kyrgios is dealing with tonight. Rafa is on 🔥 https://t.co/1UggfOVSus

Intensity was high from both players early in the match, with Kyrgios left ruing a missed opportunity to break in the opening game through a contentious overrule.

“The first game obviously came out firing,” Kyrgios said. “Had a break point. Hit a backhand. Pretty much had a ball on top of the net.

“I don’t know, I just got super frustrated. I just didn’t think it was fair, first game in the match, break point. You set the tone early, come out, break him first game. It’s a replay of the point. It’s not really fair.”

The first four games of the match took 32 minutes to complete, with both players producing sensational tennis and testing each other.

Nadal struck first, breaking in the fifth game against an increasingly agitated Kyrgios. It was the start of a run of nine consecutive games for the 31-year-old Spaniard, stamping his authority on the match.

In the end the world No.1 served out victory to claim his second China Open title and first since 2005.

“I played, in my opinion, a great level of tennis tonight. Of course, I think one of the best matches of the year,” Nadal said.

“I was playing very high intensity the whole match, changing the directions and not making many mistakes.”

Kyrgios, contesting his second ATP final of the season, admitted it was hard to find positives.

“I guess I put in a pretty good week, had some good wins. I mean, I don’t know. It’s tough to find positives when you won three games in the final,” he said.

The world No.19 now turns his attention to next week’s Shanghai Masters, where he has drawn American Steve Johnson in the first round.