From Melbourne to Beijing

Four Australian Open ball kids are working at the China Open in Beijing this week. 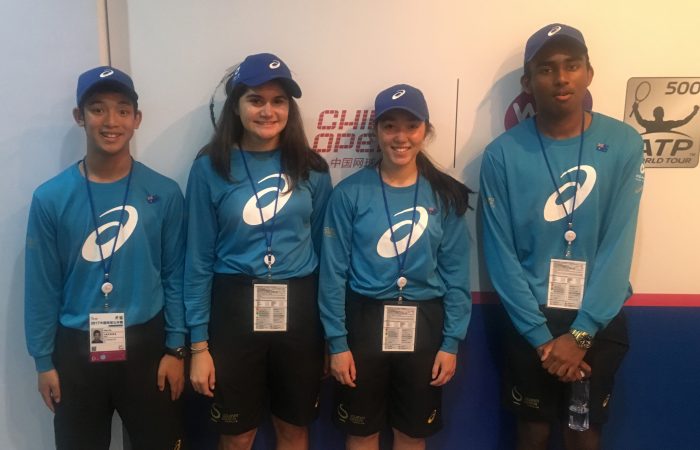 Four Australian Open ball kids are having the time of their lives at the China Open this week.

Invited to work in Beijing as a reward for being among the best-performed ball kids during the Australian Open earlier this year, they are relishing the experience.

“I was so surprised, but ecstatic, when I found out I was coming,” said 15-year-old Aidan Chu.

“It’s been a very unique experience, it’s a lot different to the AO.”

Chu noted subtle differences, such as net positioning requirements and the entering court routine had taken some getting used to.

Stacey Flaounas, 16, said it had been exciting being part of the China Open ball kid squad.

“All the other ball kids clapped when we were introduced, they’ve been so welcoming,” she said.

“It’s been so good,” said 16-year-old Maddi Chong. “It’s been eye-opening that no matter where you are from, we all speak the one ball kid language and can communicate on court.”

The group have also taken advantage of the Beijing sites, visiting famous landmarks Tiananmen Square and the Forbidden City during spare time.

But for 16-year-old Logithan Chandrakumar, his biggest highlight of the trip so far has been on court.

“It’s been the best experience,” he said. “Nadal even remembered me from the Australian Open final and gave me a smile.”

Six China Open ball kids will be selected at the end of the tournament to work at Australian Open 2018. This is the fifth year the tournaments have run an exchange program.

To apply to be an Australian Open ball kid, visit www.tennis.com.au/Ballkids.