After beginning their 2017 seasons in the finest possible style at the Brisbane International, Grigor Dimitrov and Karolina Pliskova will be back to hopefully do it all again in January. 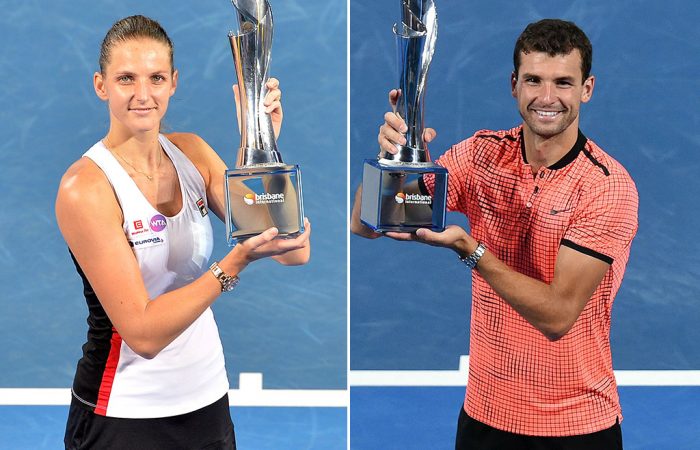 World No.8 Grigor Dimitrov and world No.4 Karolina Pliskova will return to defend their titles at the Brisbane International presented by Suncorp in 2018.

Pliskova, who reached world No.1 in July, credits her rise to the top of the rankings with her win in Brisbane, where she beat Alize Cornet in the final 6-0 6-3.

“It was the first tournament of this year and I won it, and then I got a few more titles this year so I think it all started here with my game. I got to world No.1 so I think Brisbane is where it started,” Pliskova said.

Twenty-six-year-old Dimitrov went on to reach No.8 in 2017 after he defeated Kei Nishikori in the Brisbane final for his first ATP title in more than two years.

“This year was something special to me, I’m not going to lie. I came from a very hard off season and I had to play back-to-back matches against a top 10 player. That meant a lot to me and it gave me a lot of confidence coming into the Australian Open,” Dimitrov said.

For Dimitrov, it will be the sixth time he’s started his season in Brisbane, playing at a venue he thrives in, Pat Rafter Arena.

“It’s such a humbling arena… so much tennis history behind it and you can feel it and I think people overall appreciate that so much. You as a player you want to do better, you want to improve yourself and you almost don’t want to disappoint,” he said.

Both players say they look forward to returning to Queensland each year, the tournament of choice for many top 10 players leading into the Australian Open.

“I am the defending champion and I always love to come back to Brisbane. I like the city, it’s nice, and we are always staying in the centre of the city so there are a few nice restaurants around and just enjoy the place there,” Pliskova said.

The announcement of Pliskova and DImitrov follows the news world No.1 Rafael Nadal and world No.3 Andy Murray will start their year in the Sunshine State in 2018.

Tournament Director Geoff Quinlan says nothing speaks volumes about an event like players who request to return year after year, and it’s even more significant to have such a high calibre field firming up for the tenth staging of the event in 2018.

“The Brisbane International could receive no greater compliment than having the players wanting to return year after year,” Quinlan said.

“Having such a high calibre field is even more significant as we celebrate the tenth year of the Brisbane International.

“We are delighted  our 2017 champions are returning to Brisbane to defend their titles. Fans were thrilled by the high quality of tennis displayed by both champions on their way to victory, and it was exciting to see two new names etched on the Brisbane trophies.

“With Nadal and Murray already confirmed for Brisbane this summer, the return of our defending champions shores up the quality we can expect to see on Pat Rafter Arena come January.”

Brisbane International multi-session ticket packages go on sale today at midday. All tickets will be on sale from Wednesday 11 October 2017. Please visit Ticketek for more information.