Thanasi Kokkinakis and Daria Gavrilova will team up for Australia in a Hopman Cup field headed by 19-time Grand Slam champion Roger Federer. 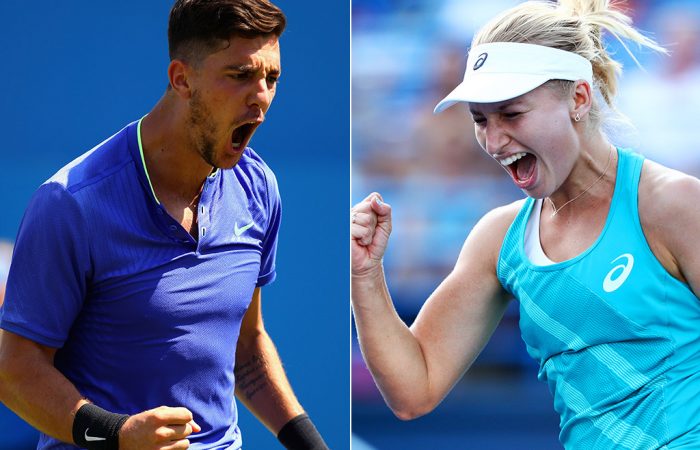 The Mastercard Hopman Cup in 2018 will feature one of the stongest fields, including three top 10 players, as it shapes up to be one of the most exciting in the tournament’s 30-year history.

Nineteen-time Grand Slam champion and world No.2 Roger Federer and Belinda Bencic of Switzerland are back to play Western Australia’s most prestigious tennis competition from 30 December to 6 January at Perth Arena.

Australian and US Open 2016 champion and former world No.1 Angelique Kerber will represent Germany, alongside sizzling young gun and current world No.4 Alexander Zverev.

Australia will be represented by 2016 champion and world No.22 Daria Gavrilova and rising star Thanasi Kokkinakis.

Belgium’s number one and world No.11 David Goffin will team up with Hobart International 2017 champion Elise Mertens, while former world No.7 Eugenie Bouchard and Wimbledon doubles champion Vasek Pospisil will play for Canada.

This year’s finalists, America’s world No.24 Jack Sock and world No.16 Coco Vandeweghe, are back following seasons where both achieved career high rankings.

Rounding out the field are Yuichi Sugita and Naomi Osaka, marking Japan’s return to the event for the first time in 16 years.

South Australia’s Kokkinakis was excited to get the call up to represent Australia in 2018 after being a reserve in 2012.

“I can’t wait. Hopman Cup is an opportunity and I’ve been wanting to play for a few years now,” Kokkinakis said. “Obviously health hasn’t let me but I had an unbelievable experience when I was 16 years old.

“It’s going to be unreal. To have three to four quality matches in the heat, maybe it’s hotter than it is in Melbourne and getting ready for the Aussie Open, is going to be perfect. Quality opposition – what better way to prepare?”

Mastercard Hopman Cup tournament director Paul Kilderry is thrilled to host one of the strongest fields in the tournament’s history in 2018.

“We have Roger Federer, world No.2 and 19-time Grand Slam champion and one of the greatest tennis players of all time, returning to Perth.

“We look forward to welcoming Angie Kerber to Perth for the very first time. We know the former world No.1 loves Australia and has had so much success here. To have Alexander Zverev, the young superstar back in Perth, is a fantastic addition to our field. He has had an outstanding year on the court and no doubt he and Angie will be a big threat to win Germany’s first Hopman Cup in 23 years.

“Australia will be represented by Thanasi Kokkinakis and Daria Gavrilova and we’re sure the public will be right behind these two.

“For the first time since 2001 the Mastercard Hopman Cup will feature a Japanese team which is a fantastic addition to our field as we look to engage the Asia Pacific region more closely in 2018.”

All session, multi-session and final tickets are now available to purchase via Ticketek.

Single session tickets will go on sale to the general public from 12pm AWST on Friday 6 October.