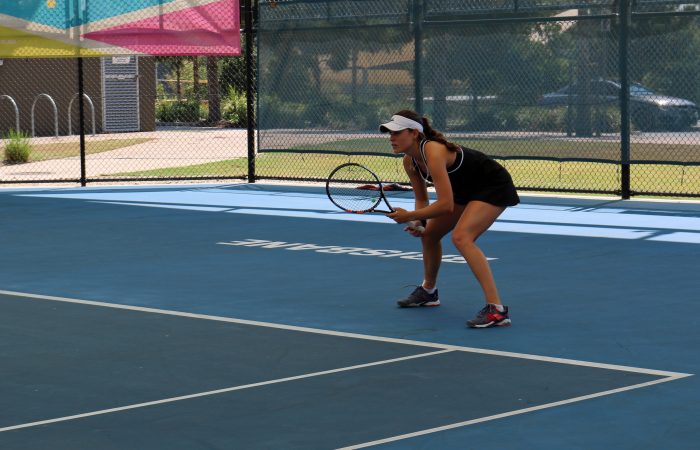 Local favourite Kimberly Birrell has backed up her runner-up performance in Penrith last week after reaching the quarters at the Brisbane QTC Tennis International on Thursday.

After a slow start against Naiktha Bains, the 19-year-old eventually found her groove and took control to win 7-6(4) 6-2.

“I was just happy that I could stick with her in the first set, and then I kind of got a foothold in the beginning of the second and got on a roll from there,” Birrell said.

After spending plenty of time on sidelines this year after an elbow injury forced her into surgery and an extended rehabilitation program, Birrell said it felt really good to be playing at home and getting consecutive matches.

“My elbow is totally fine now,” she added. “In fact, Wednesday this week marks exactly a year since surgery. I remember watching Lizette (Cabrerra) win this tournament last year in my cast, so it’s good just to be out here and playing.”

With fellow Queenslanders Cabrera and Priscilla Hon both enjoying career breakthroughs last week – each reached their maiden WTA quarterfinals – Birrell said their success spurs her on.

“Absolutely it does. We’re all really close and cheering for each other. I’m super happy for both of them. Hopefully we will all be up there and around the same rankings together soon.”

With the heat wreaking havoc on the players, all matches were completed at the Queensland Tennis Centre on Wednesday. Joining Birrell in the quarterfinals was Olivia Rogowska, who defeated her in the final to take the Penrith title last week. The third seed continued her purple patch taking down tough Japanese qualifier Chihiro Muramatsu in three sets.

On the men’s side, match of the day belonged to another couple of Queenslanders as fourth-seeded Maverick Banes and good friend Jason Kubler traded blows for over three hours in the sweltering conditions. In the end, Banes, a winner in Alice Springs last week and the No.4 seed in Brisbane, took the honours 6-7(3) 6-4 7-5.