Australia has fallen just short in the Davis Cup semifinal in Belgium. 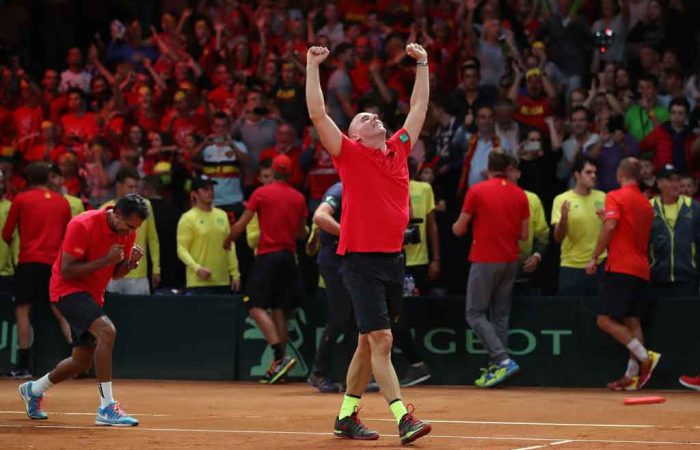 Steve Darcis has proved to be Australia’s Davis Cup nemesis yet again as Belgium sealed a place in November’s final against France with a 3-2 win in Brussels.

Earlier, an inspired David Goffin produced one the best performances of his career to come from a set down to beat Nick Kyrgios in four sets.

It is the second time Darcis has broken Australian hearts in a deciding rubber after his victory over Carsten Ball in Cairns seven years ago relegated the 28-time winners from the World Group.

Feasting off the energy of a delirious home crowd at the Palais 12 arena, Darcis broke Thompson – who was drafted in by Hewitt at the last minute instead of original selection John Millman. – in the very first game as he broke the Sydneysider.

The wily world No.77 took out the first set in 40 minutes and fought magnificently to win the second – staving off a set point with an ace after earlier holding serve following a titanic 49-shot rally.

He then broke Thompson twice early in the third and cruised to victory as Belgium reached the final for the second time in three years.

World No.12 Goffin had never beaten Kyrgios in their three previous encounters and was on the back foot in the opening set against the Canberran’s serve.

However, the Belgian held firm to save seven break points in the first three games and keep the scores level before Kyrgios won the tiebreaker with a 204kph missile.

But Goffin, who has only tasted defeat to Andy Murray in a singles rubber since 2014, responded magnificently, nailing his first break point of the match in the opening game of the second set.

Confidence restored, the 180 cm baseliner started to find his range with some crunching returns to level the match at 1-1.

The third set followed a similar trend as Goffin took a 2-1 lead.

A frustrated Kyrgios at one point in the fourth set shrugged to the Australia bench and mouthed “I am not doing anything wrong,” after another brilliant winner from Goffin.

The 22-year-old hit back after a break to level at 4-4, but immediately handed back the initiative with a double fault at 30-40 and Goffin served out for the win.

“I am extremely proud of all of the boys, all the team members,” said Australian team captain Lleyton Hewitt.

“Everyone gave 100 per cent. We left it all out there but that doesn’t make it hurt any less.”