Aussies one win away from Davis Cup final

With a commanding win from John Peers and Jordan Thompson in the doubles, Australia takes a 2-1 lead in the Davis Cup semifinal in Belgium. 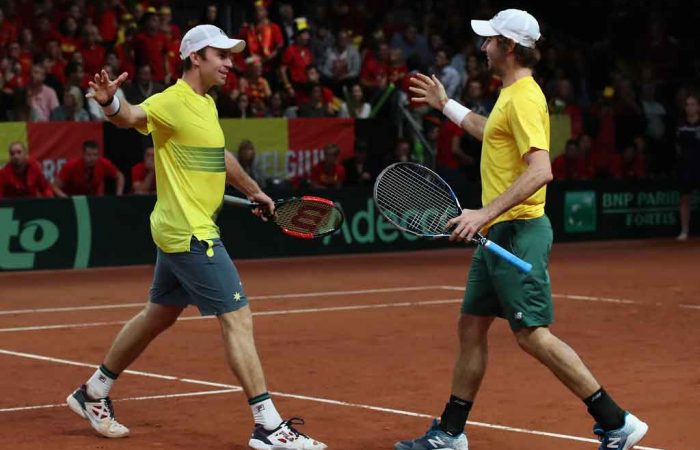 Australia are just one win away from a place in the Davis Cup final after John Peers and Jordan Thompson cruised to victory in the doubles rubber in Brussels.

Peers and Thompson brushed aside Belgian duo Ruben Bemelmans and Arthur De Greef 6-3 6-4 6-0 to set up a fascinating final day in the reverse singles at the Palais 12 Arena on Sunday.

Peers, the world No.2 doubles player, and Thompson, who is now unbeaten in four Davis Cup rubbers, got off to the perfect start, breaking Bemelmans in the second game.

That set for the tone for the rest of the match, which was wrapped up in under 90 minutes – a complete contrast to the seven hours of court action in Friday’s opening singles rubbers.

Nick Kyrgios and David Goffin will kick off proceedings on Sunday at 11pm (AEST).

A win for the world No.20, who has beaten the Belgian No.1 in all three of their previous encounters, would be enough to take Lleyton Hewitt’s side to a first decider since 2003.

Defeat for Kyrgios, who was made to fight tooth and nail for victory against Steve Darcis in five sets on Friday, would leave John Millman with the task of winning the tie against the wily 33-year-old.

Darcis has clinched four deciders in his 22-tie career, including one against Australia in 2010 when he beat Carsten Ball in Townsville to relegate the 28-time champions from the World Group.