Buoyed by the support of each other, Davis Cup stands apart from any other event for top Australian players. 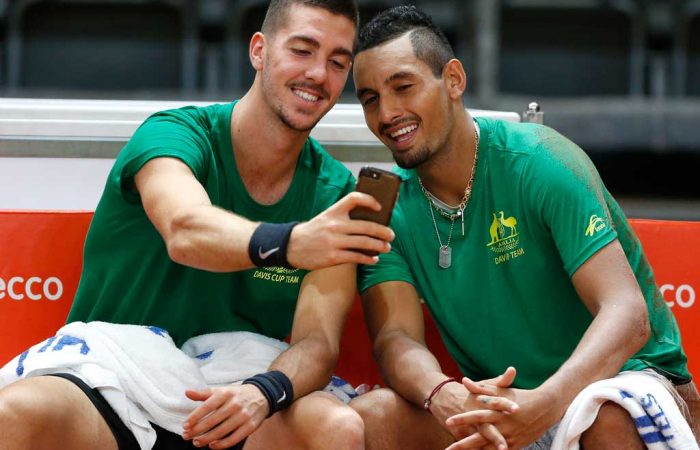 Australian players have a powerful motivator as they prepare to contest the high-stakes Davis Cup final in Belgium this weekend: the support of each other.

“I love being part of this team,” says Nick Kyrgios, who is set to lead the challenge against Belgian opponents including David Goffin and Steve Darcis.

“Growing up I played a lot of basketball and every time we come together … I love it.

“These are the closest friends I’ve got on the tennis tour.

“What we are going to do now is going to last forever. It’s such an enjoyable environment and a lot of fun.”

Kyrgios, who admits that motivation can at times be hard to maintain on the individual tour, says he has no such problem when competing for Australia.

“You’re not playing for yourself,” he points out. “I find it easier to play for these guys and I feel it’s helped me so much throughout my career.”

“These are the most fun weeks of my career, no doubt.”

“The weeks we had in Brisbane, Melbourne, Sydney … that is what I love about Davis Cup.”

Certainly that’s showed in Kyrgios’ flawless Davis Cup record this season. Wins against Czech Jan Satral and Americans John Isner and Sam Querrey have all been achieved without the loss of a set, helping Australia’s progression to the semifinals.

Jordan Thompson has also achieved his best results in the team environment, the Sydneysider amassing a perfect 3-0 win since his debut for Australia in February.

Two of those wins were against higher-ranked opponents, the Sydneysider overcoming Czech Jiri Vesely in the first round and upsetting American Jack Sock in the quarterfinal.

“It’s had a massive impact,” notes Thompson, who later defeated world No.1 Andy Murray at Queen’s and Sock again at the US Open.

“I always wanted to represent this country and playing Davis Cup against the best players, I’ve had a couple of good wins so it’s given me a lot of belief.”

Thanasi Kokkinakis, absent in the Davis Cup team for the past two years due to injury, is also inspired by the team environment.

“It feels great to get the call-up,” says the South Australian.

“Obviously it’s been a couple of years since playing Davis Cup and I’ve been sitting and watching it back home. The guys have done a phenomenal job this year.

“(I’ve had great experiences two years ago playing in the semis in front of that crowd in Scotland so hopefully the atmosphere is pretty similar.

“I can’t wait to be part of the group again.”

Victory over Belgium would earn Australia a home final in November against either France or Serbia.