Nick Kyrgios has described his love for team competition and playing for both his country and captain Lleyton Hewitt as he helps Australia target a place in the Davis Cup final. 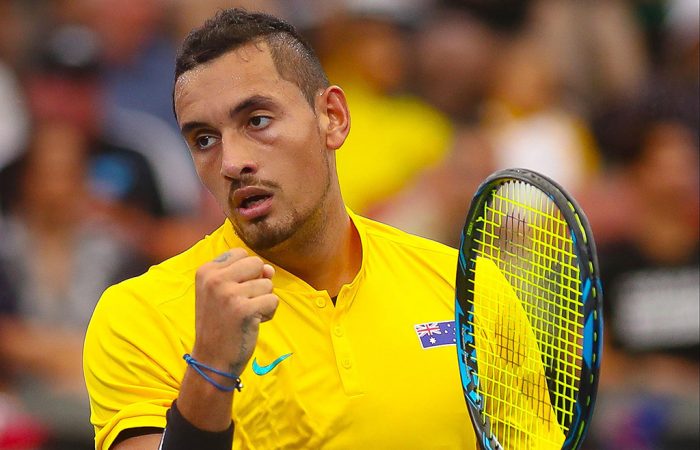 Nick Kyrgios has revealed his plans to “run through a brick wall” for Lleyton Hewitt to ensure Australia reaches its first Davis Cup final in 14 years.

Kyrgios has been under a fitness cloud since hurting his shoulder in a first-round US Open loss to countryman John Millman, with Hewitt giving his spearhead time off serving in the lead-up to Australia’s semifinal against Belgium this week.

But in ranking Davis Cup as his top priority in 2017, Kyrgios says he owes it to his captain and former baseline warrior to put his battered body through hell to help Australia prevail in Brussels.

“Davis Cup for me is one of the most important events that I can play. I would love to win one,” Kyrgios said ahead of Thursday’s draw for the indoor claycourt tie starting on Friday.

“I’m just a massive fan of team sports and that’s probably the closest thing we’ve got in tennis.

“I love getting out there with a team and getting behind everyone that I’m close with and trying to get the win for the country obviously.

“But just that whole week, building that chemistry with a team. I literally love playing for someone other than myself for once.”

But tennis’ most polarising personality says there’s no one he loves playing for more than Hewitt.

“‘Rusty’ has helped me a lot. I think he’s the best captain we’ve ever had. I know that everyone on our team would run through a brick wall for him.

“He’s been an unbelievable support for me. I know there have been times this year where I wasn’t doing too well mentally and he’s obviously always been there.

“Davis Cup has done wonders for me this year. It’s really made me find that love again for just being with the guys and having some fun, knowing that tennis isn’t all bad, knowing that you can have some fun with it.”

Kyrgios believes Australia has its best chance in years to win the trophy for the first time since Hewitt teamed with Mark Philippoussis, Todd Woodbridge and Wayne Arthurs to topple Spain in 2003.

“We played a great tie in Brisbane against the United States a couple of months ago and we’ve always been looking forward to this. We’ve always stayed in contact, we haven’t forgotten about it.

“Just thinking about it brings me so much excitement. To take home the trophy would be probably a dream come true for me.”

Hewitt will likely spring a minor surprise and name Thanasi Kokkinakis as Australia’s second singles player in his first tie in two years, and Jordan Thompson to partner John Peers in the doubles rubber.