Daria Gavrilova has continued her winning week at the Connecticut Open, advancing to the semifinals with a straight-sets win over Kirsten Flipkens. 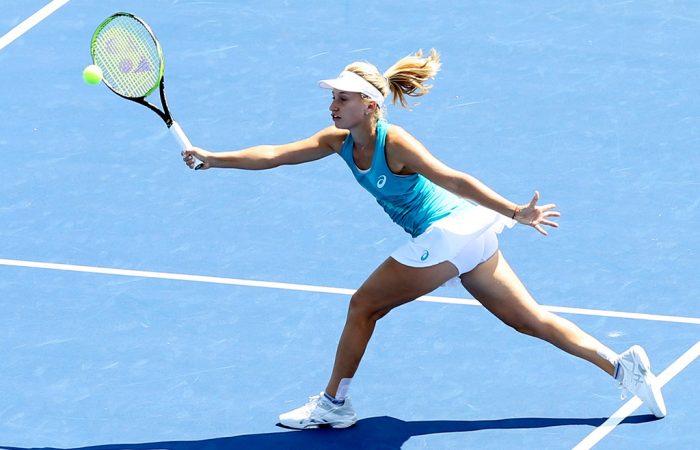 Australia’s women’s No.1 Daria Gavrilova has continued her US Open preparations with a straight-sets win over Kirsten Flipkens at the Connecticut Open.

Gavrilova beat the world No.76 6-2 6-4 for a first career victory over Belgium’s Flipkens, who had won the pair’s only previous meeting.

The Melbourne-based Australian will next face the winner of the match world No.10 Agnieszka Radwanksa – the tournament’s top seed and defending champion – and China’s Peng Shuai.

“After the first set I looked at the stats and saw I saved six break points and thought ‘oooh, that’s pretty good’,” Gavrilova said.

“My plan was to be aggressive. She’s a very tricky player. I got fired up the second set.”

Gavrilova is yet to win a match at the US Open, which begins on Monday; she was eliminated at the first hurdle in 2015 and 2016.

She is chasing a maiden WTA title after earlier this season reaching the final in Strasbourg, where she lost to Sam Stosur – the player she usurped as Australia’s top-ranked woman.

In Thursday’s other early quarter-final Elise Mertens of Belgium advanced past China’s Shuai Zhang in a walkover.