Daria Gavrilova came through a tense encounter against 13th seed Kristina Mladenovic to set up a second-round meeting with Camila Giorgi at the Western &#038; Southern Open. 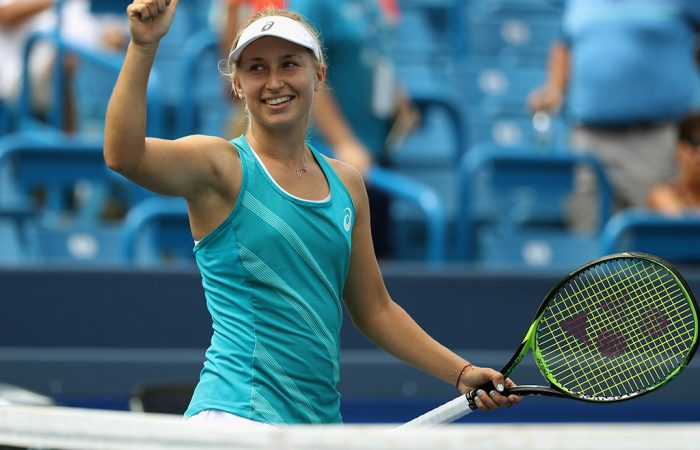 Daria Gavrilova fought off nerves and some serious serving problems to beat French world No.13 Kristina Mladenovic in the first round of the Western & Southern Open in Cincinnati.

Gavrilova won a rollercoaster ride of a match 6-0 7-6(6) to claim a big scalp and book a second-round showdown with Italian qualifier Camila Giorgi.

Giorgi advanced with a straight-sets win over Czech Katerina Siniakova.

Another Aussie, John-Patrick Smith, fell in the opening round.

The qualifier, who’d won two matches to reach the main draw, fell to Frenchman Richard Gasquet 6-4 6-6; Gasquet will next take on No.1 seed Rafael Nadal.

Gavrilova acknowledged she was lucky to get through the tough first-round clash.

“I knew that Kiki didn’t play her best game (in the first set), or probably throughout the whole match, but neither did I,” Gavrilova said.

“We have pretty similar game styles, both like to be aggressive with the forehand and pretty creative. It’s always tough to play someone similar to you, and we’re pretty good friends off the court too.

“First rounds are always tough. So I’m just happy for the W.”

The Australian world No.26 breezed through the first set in 24 minutes, smacking several forehand winners against a misfiring Mladenovic and looked in complete control.

Helping her were the errors streaming from Mladenovic’s forehand wing, but then in the second set the match changed.

Gavrilova started going for more and made errors of her own, while Mladenovic was making her shots.

Still Gavrilova broke Mladenovic at 4-4, but her serve, so often a problem let her down as she proceeded to serve many of her 11 double faults late on.

Serving for the match at 5-4 the 23-year-old Australian opened with two double faults and gave the break back.

When Mladenovic took a 6-5 lead the Frenchwoman was full of confidence.

Gavrilova, though, took the match to a tiebreak and hung tough. And when a Mladenovic forehand sailed long, Gavrilova advanced.