Tomic on high alert at Wimbledon

Bernard Tomic will look to win for the second time win a week over Mischa Zverev when he takes on the 27th seed in the first round of Wimbledon on Tuesday. 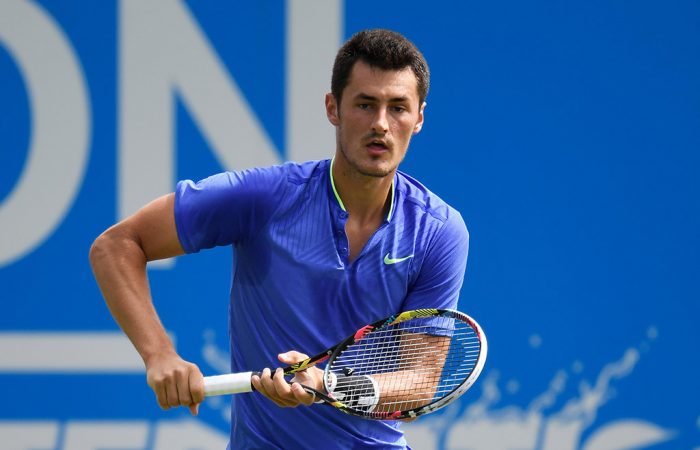 At his best, Bernard Tomic considers himself one of Wimbledon’s top 10 contenders and knows he has the grasscourt game to prosper on The All England Club lawns.

But he also knows he must immediately find his A-game to survive a testing first-round encounter with wily 27th seed Mischa Zverev on Tuesday.

“My opinion, he’s top 10, top 15 player on grass: streaky, he plays the right game to play on this surface, he’s playing the best in his career, made the quarters of the Australian Open, beat Murray,” Tomic said.

The Australian No.2 made the Wimbledon quarterfinals as a teenager in 2011 and has ventured to the second week twice more since, including last year when he was two points from reaching the last eight again before falling to Lucas Pouille in a five-set gut-wrencher.

He has an encyclopedic memory when it comes to assessing opponents and got a useful first-hand look at Zverev last week in Eastbourne.

Tomic trumped the German for his fourth grasscourt win in a fortnight before losing to Gael Monfils later in the afternoon.

He has full respect for Zverev, the older brother of Next Gen star Alexander who has climbed to a career-high ranking in a breakout 2017.

“This match is tough, regardless if I beat him last week and I have to play well because it’s Wimbledon and everyone is looking to play their best here and he plays the right game against me,” Tomic said.

But the young veteran senses an opportunity to open his draw with a win against the seeded Zverev.

“I feel I’m top 10 as well on this surface when I’m playing well. My fitness level is not the best, but it’s there and the last month has been positive for me.

“It was good to beat Zverev and I had a chance against Gael, had two set points in the first and lost that. Played two matches that day, was a bit tired.

“But I’m pretty confident and found a bit of form in Eastbourne, which is positive, and now I need to take that into the first round.”