After Grand Slam disappointments away from Melbourne Park, Daria Gavrilova is refusing to look beyond her first-round match at Wimbledon. 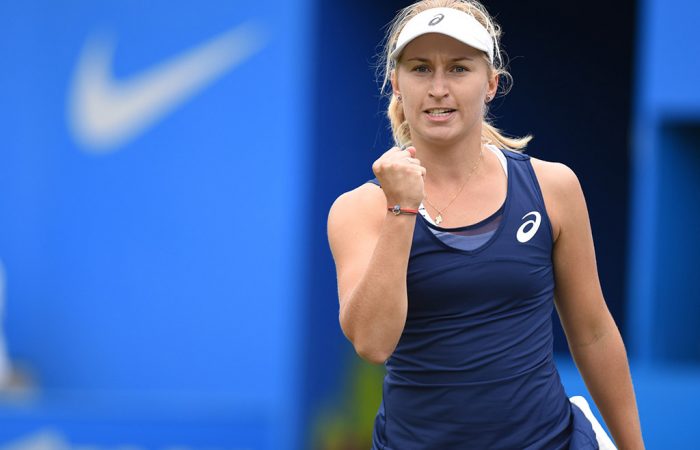 Having learnt the hard way not to set lofty Grand Slam goals, Daria Gavrilova has modest hopes for Wimbledon.

The 23-year-old is up against dangerous Croatian qualifier Petra Martic on Tuesday and is refusing to take comfort in her first-time seeding at the All England Club.

“I’ve been heartbroken a few times at slams, losing first round. My biggest goal is to finally get through first round. Actually I did here last year.

“It’s always tough to play first round of slams. It’s a different pressure. I’ll give it my best chance again.”

In reality, despite downplaying her prospects, Friday’s draw presented Gavrilova with a golden opportunity to reach the second week.

The first higher-ranked player she is projected to meet is Russian 16th seed Anastasia Pavlyuchenkova in the third round, a rival just five places above her – and her sometimes doubles partner.

“I won’t go and look too far ahead,” Gavrilova said.

“I really believed that I could do really well there (at the French), at least making the second week. But, to be honest, the circumstances. I was really tired from playing so much tennis.

“I’m only in my second consistent year on the tour so I’m still learning a lot.”

The former world junior No.1 says she is happy with her grasscourt build-up.

“I’ve had a pretty good few weeks, played some pretty good tennis on the grass, so I’m ready to go,” Gavrilova said.

Victory would set up a second-round clash on Thursday with either Risa Ozaki of Japan or Czech Denisa Allertova.